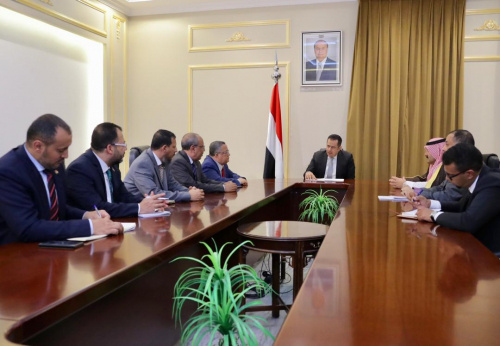 The head of the negotiation affairs unit of the Southern Transitional Council, Dr. Nasser Al-Khobaji, met on Monday, with Prime Minister Dr. Moein Abdul-Malik, in the presence of the Ambassador of the Custodian of the Two Holy Mosques, Mohammad Al Jaber, within the framework of the pivotal role that the Kingdom of Saudi Arabia plays, and its sponsorship of the Riyadh Agreement and the mechanism for accelerating its implementation, and its commendable efforts and good endeavors to address the challenges and obstacles that hinder the implementation of what has been agreed upon.

The meeting included consultations on ways to address the reasons that led to the suspending of the Southern Transitional Council to its participation in the consultations to implement the Riyadh Agreement, in which consensus was reached on intensifying efforts to accelerate the formation of the Riyadh Agreement government, and the implementation of the process of withdrawing military forces from Abyan to the fronts according to a chronic plan stated in the text of the agreement.

It was also agreed to address issues of salaries and financial allocations, including caring for the families of the martyrs, treating the wounded, settling public institutions and services in the liberated governorates, and addressing the issues of retirees and military and security deportees, and resolving teachers’ conditions.

The meeting was attended by the members of the Presidency of the Council and the Negotiations Affairs Unit, Mr. Ali Al Kathiri, Mr. Abdul Rahman Sheikh, Mr. Adnan Al Kaf.