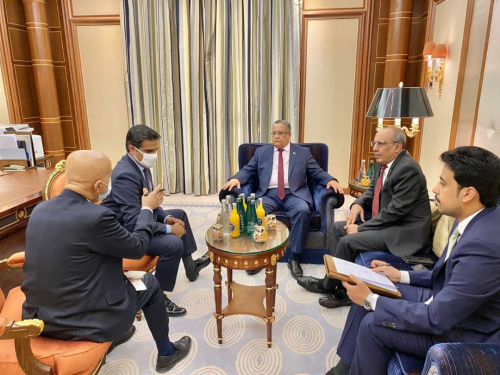 Dr. Nasser Mohammad Al-Khubaji, member of the Presidency of the Southern Transitional Council, Head of the Negotiation Affairs Unit of the Transitional Council, received on Thursday, in his residence in the Saudi capital, Riyadh, the Deputy Ambassador of the United States of America, Mr. Junaid Jay Munir.

The meeting discussed the current political situation, and opportunities for progress in the ongoing negotiations sponsored by the Kingdom of Saudi Arabia, in which Dr. Al-Khubaji stressed on the support of the Transitional Council to the efforts made by the Kingdom, pointing out to the need to implement the Riyadh Agreement as a starting point towards a comprehensive peace process sponsored by the nations United.

Dr. Al-Khubaji also stressed in the same regard on the implementation of the agreement on the basis of the principle of partnership and equality, noting that the establishment of the cease-fire requires more efforts, in addition to the need to form a government of technocrats equally in accordance with the Riyadh Agreement, in which the Transitional Council will represent its allies and the southern components supporting the project of the cause of the people of the south, and their active participation in the coming stage.

Dr. Al-Khubaji also pointed out that according to the Riyadh Agreement the restructuring of state institutions such as the Economic Council, the Central Auditing and Accounting Agency, and the Supreme National Authority for Anti-Corruption is an important part that must accompany the formation of the government, in addition to canceling all unilateral decisions that have been taken after the signing of the Riyadh Agreement at all levels. .

Dr. Al-Khubaji also talked about the Transitional Council's support for the peace process led by the Secretary-General's envoy, pointing out to the need to start forming a joint negotiating delegation in accordance with the Riyadh Agreement, in addition to implementing the changes stipulated in the Riyadh Agreement with regard to the local authority in the capital Aden and the governorates of the south.

For his part, the American Deputy Ambassador urged the Transitional Council to positively deal with the efforts of the Kingdom of Saudi Arabia, stressing his country's unlimited support to the Kingdom and its efforts in this file and the region.

The meeting was attended by Mr. Ali Abdullah Al Kathiri, member of the Presidency of the Southern Transitional Council, member of the Negotiation Affairs Unit, and Mr. Mohammad Al Ghaithi, Deputy Head of the General Department of Foreign Affairs.