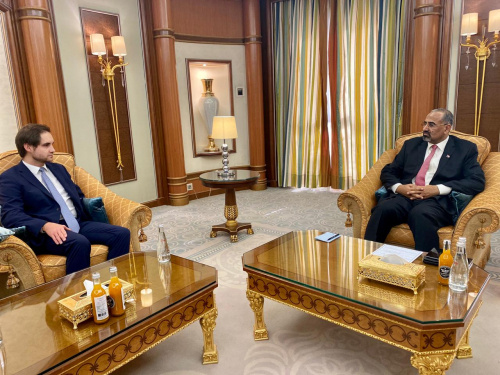 The President of the Southern Transitional Council, Supreme Commander of the Southern Armed Forces, President Aidros Qassem Al-Zubaidi, received, today, Thursday, at his residence in the Saudi capital, Riyadh, officials from the Federal Republic of Germany, headed by Deputy Ambassador Jan Kroeser.

The meeting discussed the political and military files, and the repercussions resulting from the humanitarian crisis and the spread of the new Corona virus, in this regard, President Al-Zubaidi presented the Transitional Council’s vision, calling urgently for the formation of a new government, divided equally between the Transitional Council and Yemeni legitimacy according to the Riyadh agreement, to deal with the tasks of resolving the files that affect the lives of citizens, and also to follow up the implementation of any other agreements.

President Al-Zubaidi appreciated the efforts of the Kingdom of Saudi Arabia to establish peace, stressing on the necessity of accepting the principle of partnership, and that the attempt of legitimacy to evade this principle will get no benefit, pointing to the attacks by terrorist groups in Abyan.

President Al-Zubaidi also affirmed in the same regard the Transitional Council's support for the comprehensive peace process sponsored by the United Nations through its Special Envoy Martin Griffiths, as well as stressing on the Transitional Council's readiness to participate in the process effectively, pointing out to the impossibility of reaching to a solution without real and complete representation of the South at the negotiating table.

For his part, Mr. Jan Kroeser affirmed his country's welcome stance towards any solutions through peaceful means, appreciating the council’s position represented in its desire for dialogue and peace.

Mr. Jan Kroeser pointed out to his country's support for the humanitarian efforts, and its support for the Riyadh agreement, and the need to find an urgent solution to all outstanding issues.