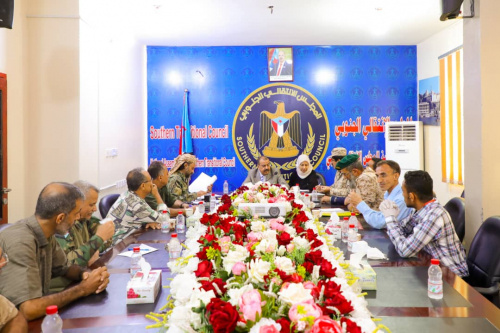 Major General Ahmed Saeed bin Brik, Chairman of the National Assembly of the Southern Transitional Council, President of Self-Administration for the South, met on Thursday, at the Assembly’s headquarter in the capital, Aden, with a number of leaders of the Southern Resistance, headed by Commander Abdel Nasser (Abu Hammam), and in the presence of Attorney Niran Sooki, member of the Presidency of the Transitional Council,  Vice-Chairman of the National Assembly.

The meeting discussed the military situation in the South in general and in the governorate of Abyan in particular, specifically Shokra region and its developments with the victories achieved by the southern army on that front.

The meeting also discussed the calmness that was supposed to take place between the two parties of the conflict, and the violations carried out by the Brotherhood's Islah forces, and the role of the Southern Transitional Council in facing those violations.

The meeting dealt with the services issue in the south and its contrived crises made by some cells affiliated with the government that lacks legitimacy and its role in trying to thwart the self-administration of the south in services side after its catastrophic failure in the military side.

The meeting reviewed the efforts made by the leadership of the Transitional Council and the self-administration of the South in stabilizing service aspects, especially electricity, and facing the deliberate sabotage in the electricity sector, tracking and holding accountable those involved in these sabotage acts, yn addition to the legitimacy practices of (Islah Party) in its service war against mainly southern citizens and self- administration in particular by preventing traders from supplying the capital Aden with oil derivatives to electricity power stations, and making the southern citizens suffer in hot summer of Aden.

At the conclusion of the meeting, basic and initial points were set for the sake of strengthening the protection of the homeland and citizens in the south, and for the success of the self-administration announced with the aim of protecting the wealth of the south from tampering with, and the joint coordination between security and southern resistance to the success of the measures undertaken by the self-administration.