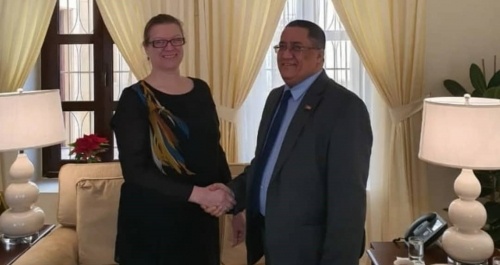 Dr. Nasser Al-Khubaji, member of the Presidency of the Southern Transitional Council, Head of the Negotiation Affairs Unit, Head of the Transitional Council Team in the Joint Committee to follow up the procedures of implementing the Riyadh Agreement, met on Thursday, with the Acting Deputy US Ambassador to Yemen and Head of Political and Economic Affairs in the Kingdom of Saudi Arabia and Yemen, Ms. Nicole Mans.

During the meeting, Dr. Al-Khubaji expressed the deep gratitude of the Southern Transitional Council to the role of the United States of America plays in combating terrorism and bringing peace to Yemen and the region.

Al-Khubaji indicated that the Southern Transitional Council implemented all its obligations related to implementing the terms of the Riyadh Agreement, including withdrawing its forces from the Abyan governorate and collecting heavy weapons, while the other party remained unresponsive in implementing its obligations, including its refusal to withdraw its forces from the governorates of Abyan and Shabwa, especially the forces Led by Saeed Moayli and the special forces led by Abd Rabu Laakab, who practice killing, abuse, and violations, especially in Shabwa governorate, and they refuse to release the detainee Mohammad Ahmed Al-Faidhi.

Al-Khubaji stressed on the need to put an end to the military movements and violations practiced by the government forces in Shabwa, Abyan, Hadramout valley, Socotra, and Al-Mahra, stressing that these increase the tension, and the obstacles in the face of implementing the Riyadh Agreement.

Dr. Al-Khubaji stressed that the success of the implementation of the Riyadh Agreement lies in accelerating the formation of the government and economic bodies, and combating corruption in state agencies, and speeding up the appointment of governors and managers of security in the southern governorates.

Al-Khubaji pointed out that the Southern Transitional Council attaches great importance to confronting the Houthi threat, and the Iranian project, and combating terrorism, affirming Transitional Council's position side by side with the Arab Coalition led by the Kingdom of Saudi Arabia.

Dr. Nasser Al-Khubaji praised the pivotal role that the Kingdom of Saudi Arabia plays in implementing the Riyadh Agreement and overcoming the difficulties and obstacles facing the implementation process, stressing that the Southern Transitional Council stands as a strategic ally alongside Saudi Arabia in facing regional threats and combating terrorism in the region.

For her part, Mrs. Nicole expressed the support of the United States of America to implement the Riyadh Agreement with all its contents, noting that all challenges facing the implementation process can be overcome, stressing on the need for cooperation by all parties to facilitate the full implementation of the Agreement.