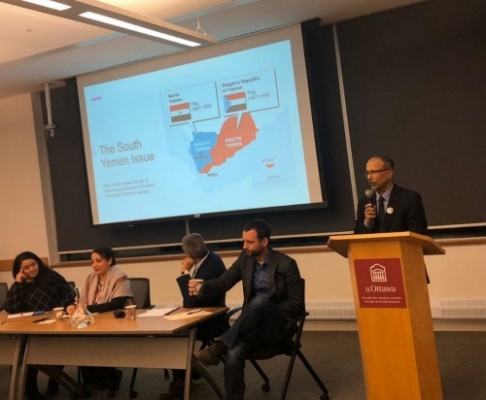 The Center for International Policy Studies at the College of Social Sciences at the University of Ottawa in Canada, in coordination with the Office of the Department of Foreign Affairs for the Transitional Council of Canada, organized on Tuesday, a political seminar on the Yemen war and the southern issue.

Saeed stressed that there can be no peace in Yemen and in the region without resolving the southern issue and the right of the people of the south to determine their fate, stressing the importance of the Transitional Council's participation in the upcoming political settlement to solve the Yemen crisis.

Saeed pointed to the role of the Southern Transitional Council and its resistance in combating terrorism and extremism alongside the Arab coalition countries, led by the Kingdom of Saudi Arabia and the United Arab Emirates.

The seminar was administrated by Thomas Bono, Assistant Professor of International Relations at the University of Ottawa and specialist in Yemeni and Southern affairs, and in participation of Rasha Jarhum, Director of the Peace Path Initiative, Fatima Abul-Asrar, researcher at the Middle East Institute, and Kamal Al-Salili, professor of information at the Canadian University of Ryerson.

The seminar was attended by a number of media professionals, university professors, students of political science and political activists, as it is the first seminar on the southern issue to be organized by the University of Ottawa in Canada.