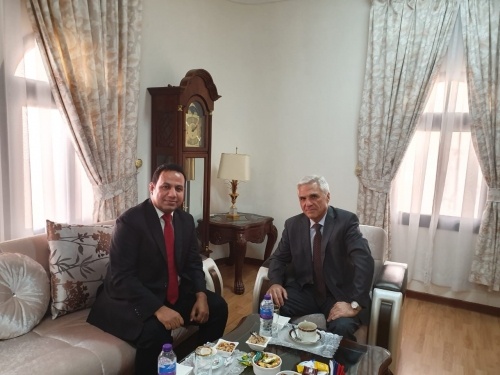 The Representative of the General Directorate of Foreign Affairs of the Southern Transitional Council, Adel Al-Shabhi, met on Monday in Riyadh of Saudi Arabia with Mr. Vladimir Dodishkin, the Ambassador of the Russian Federation to Yemen.

During the meeting, the two sides discussed the current situation in the South, and in Yemen, and the region in general.

The meeting reviewed historical relations between the former Democratic People's Republic of Yemen and the Soviet Union.

In the meeting, Ambassador Dodishkin stressed his country's standing with dialogue, stopping the war, and ending the conflicts, stressing on the right of the people to choose their suitable way for their life.

Al-Shabhi praised the Russian position for the south, and the Yemeni war, and the interest of the Russian leadership and its readiness to play an important role in the next stage, especially as the Russian President Vladimir Putin, will visit the Saudi capital of Riyadh in the coming days.