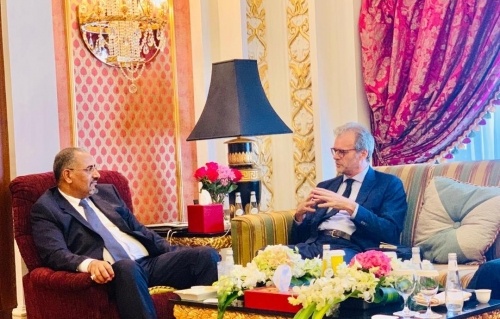 The President of the Southern Transitional Council, Supreme Commander of the Southern Armed Forces, President Aidaroos Qasim Al-Zubaidi, received on Wednesday at his residence in Jeddah of Saudi Arabia, the French Ambassador to Yemen, Mr. Christian Testo.

The meeting discussed several topics related to the security and the political file of the south, in addition to discussing developments of Jeddah dialogue sponsored by Saudi Arabia.

During the meeting, President Al-Zubaidi affirmed the Transitional Council's commitment to peace and its readiness to deal positively with international efforts for peace, in which that ensure the southerners right to determine their political future, pointing out that Jeddah dialogue comes within the framework of keenness of the Kingdom of Saudi Arabia to maintain security and protect the region from chaos and terrorism.

President Al-Zubaidi stressed on the solid position of the Transitional Council towards supporting Arab Coalition, and its stand with them in fighting the Iranian expansion of the Houthi militias.

President Al-Zubaidi praised the efforts of the Republic of France in supporting a comprehensive and lasting peace process under the umbrella of the United Nations, which guarantees the southerners right of self-determination, stressing that the French interests in our country are of interest to the Transitional Council.

For his part, the French ambassador expressed his delight at this meeting, and appreciated the position of the Southern Transitional Council towards peace in its response to Jeddah dialogue, stressing that the recent developments require the presence of southerners in the peace process and the listening to their voice and find a just solution to their issue.