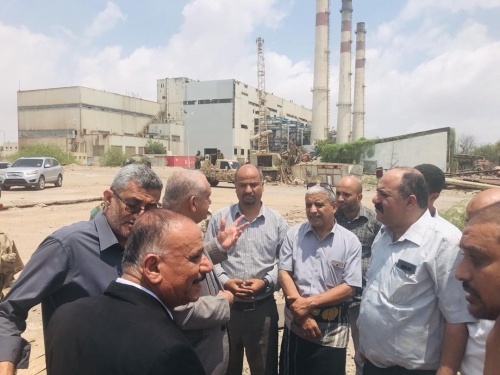 In their visit, they checked on the status in this critical services facility and the work progress there. Al-Wali and Humaid met the Director General of the station, Eng. Jamal Bin Shujaa, who briefed them on the readiness of the plant and the obstacles facing the implementation of some tasks, pointing out that one of the reasons for the lack of power generating capacity is due to lack of fuel.

For his part, Dr. Abdul-Nasser Al-Wali, thanked all employees in the services sector, especially electricity and water in Aden the capital for their possible excreted efforts to keep the services running.

In the context of the visit to Al-Hiswa station, Dr. Abdul-Nasser Al-Wali inspected the construction works of the power project implemented by Petro Messila with a capacity of 260 MW as well as the plant donated from the UAE, estimated at 100 MW.