In response to the call of the Transitional Council 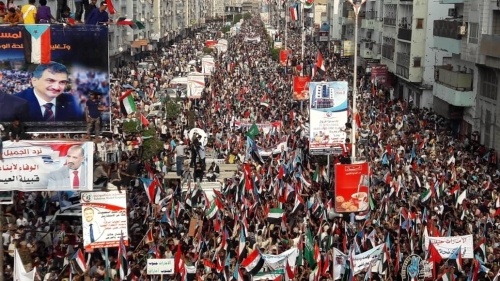 In response to the invitation of the leadership of the Southern Transitional Council, Madram Street in the city of Mualla in Aden the capital, and the "Decision is Ours / Al-Karar Kararna" square in Mukalla city of Hadramout, witnessed mass rally of million for the Gratitude to the brothers in UAE and Arab Coalition, and in support of the steps taken by the Southern Transitional Council to combat terrorist elements hidden under the cover of the so-called Yemeni legitimacy.

The Chairman of the National Assembly of the Southern Transitional Council, Major General Ahmed Saeed bin Brik, delivered a speech in which he affirmed the firm position of the people of the South along with the legitimacy of President Abdu Rabbo Mansour Hadi and the Arab Coalition.

Ben Brik also stressed on the position of the people of the South in combating terrorism through the presence and stability of the resistance forces and the southern armed forces with the security belt and the elites which are on the ground and on the fronts of fighting.

Ben Brik said: "From this standpoint, we send a message to the leadership and people of the Arab Coalition countries, especially Saudi Arabia and the United Arab Emirates, your support for us is an unforgettable favor for the people of the South who will do same to you

, and we will always be firm in our position in the past, present and future. "

Ben Brik continued:" Our second message is to our brothers in the north; we assure you that we are pacifists and we extend our hands to you with the Arab Coalition forces to provide moral and military support to get rid of the dominance of the gangs that have given their allegiance to Iran and other regional powers. ''

Ben Brik concluded by delivering a third message saying: "To our brothers in the south and the province of Abyan in particular, do not believe or rush to false records promoted by Qatar Turkey, Abyan made a lot of sacrifices, and did not receive its right in services, we are in the leadership of the Transitional Council and the people of the south will not exclude anyone and there is no one guardian of the other, we hope all our brothers who are in Abyan or other regions to trust that this leadership is not the book of God, but will do our duty, and trust that we will stand against anyone who uses the method of provocations on our citizens in Abyan or other areas. "

Bamalem pointed out that those who refuse dialogue with the Transitional Council will be forced to the dialogue, upon the justice of the cause adopted by the Transitional Council, and the broad masses the Council represents, which have struggled for years, and scarified the precious to reach what we have achieved today to the liberation of our land.

Bamalem added: "Our people, under the leadership of the Southern Transitional Council, are on the path of liberating the remains territories, the valley of Hadramout, Mukiras, and Behan, all will be liberated."

Bamalem expressed his condemnation to the frantic media campaign launched by the Muslim Brotherhood and the government against the United Arab Emirates, stressing that the people of the South will remain sincere to those who were faithful to them.

Bamalem concluded by saying, "If there is a word we address in this marsh of million, it is the word of thanks and gratitude to our fellow brothers leadership and people in UAE, for their sincere Arab attitudes towards our people and their just cause."

On the occasion of the two events, as well as the mass march in the province of the archipelago of Socotra, which was attended by thousands of people from different regions and provinces of the south from; The Presidency of the Southern Transitional Council issued an important political statement, read by Dr. Khaled Bamdhaf, Head of the Political Department at the General Secretariat of the Presidency of the Southern Transitional Council.. here it is:

In the Name of Allah,

the Most Merciful and Most Gracious
Our Southern People:

your mobilization today in Aden and Hadhramaut comes in gratitude for the efforts of our brothers in the Arab Coalition led by Saudi Arabia and UAE and their support for us.
Your attendance in response to the call of president Aidaroos Al-Zubaidi, president of the Southern Transitional Council, is a historic message of loyalty and appreciation for our brothers in the Arab Coalition and their glorious attitudes towards the southern people and southern armed forces in the face of the Iranian agenda and terrorist activities.

Today, the Transitional Council and all sectors of the southern society prove their clear rejection of all tries to maim the southern public will and southern close links to the Arab Coalition, especially UAE.
Our Heroes of the South:

Your mobilization today is the most significant message of appreciation for all efforts of our brothers in UAE and a clear indication of our commitment with true partnership that fulfills the expectations of our Arab nation to live in dignity and reject terrorism and oppression.
Your mobilization in the million marsh of gratitude clearly indicates your appreciation for the sacrifices of our brothers in UAE in defense of the south through facing Al-Houthi militias and terrorist gangs of Muslim Brotherhood in addition to their humanitarian efforts in support of our people in all daily living and services fields during a very difficult and complicated stage, while those who are responsible escaped their responsibility and turned into lords of war and billionaires at the expense of our people’s suffering.
True Southern Ladies and Gentlemen:

In the name of the southern transitional council, and on behalf of you all, we express our true greetings, appreciation, gratitude, and loyalty to our brothers in the Arab Coalition led by Saudi Arabia and UAE.

We assert to the whole world that we appreciate and respect the attitudes of the Arab Coalition and leadership and people of UAE.

We are determined to fulfill our commitment to the oath written by the bloods of noble Emirate and Southern martyrs.

We are going on fighting all types of tyranny and extremism till victory is achieved.

Glory and eternity to the South and the Arab Coalition