President Al-Zubaidi: Our forces continue with military efforts until security prevails and whole south is liberated

President Al-Zubaidi: Our forces continue with military efforts until security prevails and whole south is liberated 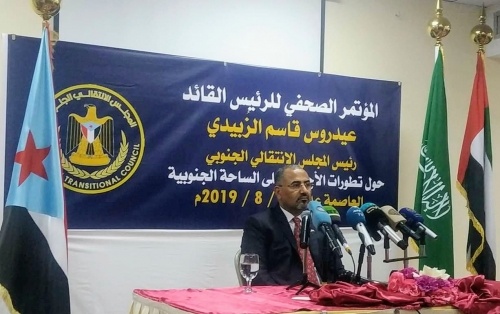 In a press conference held on Thursday to reveal the details of the events in Aden the capital and the governorates of Abyan and Shabwa, President Al-Zubaidi said: " Targeting the south is not new, in which we have been targeted since 1994, and what happened on August 1, 2019, was the beginning of a plan aimed at getting the whole south under terrorism but we uncovered this and thwarted the plan and confronted it with courage and with the will of the people of the South."

President Al-Zubaidi added: "We were surprised by the attacks on our people in Shabwa under the name of legitimacy and targeting the elite forces to restore the international terrorist threat in the region."

President Al-Zubaidi continued: "We have been and still pacifists, and we reject violence, but the forces of terrorism have not realized that, they believe that they can break our will, and abort our victories, and confiscate the goals of the people of the South to restore the southern independent federal civil state, they also wanted to fail our efforts to combat terrorism by supporting the terrorism to be returned to our country in order to discourage us of our national project that is based on the international laws. "

President Al-Zubaidi said: "We are currently working to remove any terrorist threats within Aden the capital in particular and the south in general, and our armed forces will continue the military and security efforts until the South is safe and secure and fully liberated."

President Al-Zubaidi added: "As per our responsibility, we have decided to grant amnesty to all seduced southerners who have been implicated in this terrorist aggression, and we will ensure applying rules of law and will not allow any violation."

President al-Zubaidi called at the press conference on the citizens to preserve public and private properties and facilities, and to maintain public tranquility, and to cooperate with security agencies, stressing that the Transitional Council will continue to support services and needs that affect the lives of citizens.

He added: "We are looking for a homeland, and we want everyone to understand that, and realize that we are looking for peace, stability and freedom, and it is enough for the south the suffering in the past decades, so let's open a new page marked by defending the south and supporting the aspirations of its people."

President Al-Zubaidi affirmed the continuity of the partnership with the Arab Coalition countries in fighting against the Houthi and terrorism and extremism, stressing that we will defend our country against any threats, and victory will be in our side.