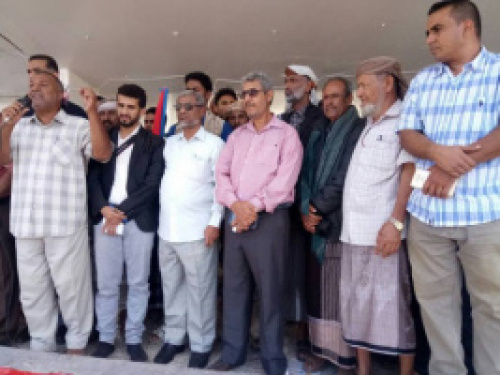 Member of the presidium of the Southern Transitional Council, chair of the Thought and Guidance department Brigader Ahmad Bamualem and chair of the Organisation Department Ameen Saleh with Colonel Aidros Haqees chair of the local leadership of the STC in Abyan governorate have participated at the popular event today which was called by the Southern Trade Unions at the ‘Sahat Al Aroudh Square’ in Khormaksar –Aden. The event is a rally calling Ben Dhagher’s corrupt government to step down.

Brigader Ahmad Bamualem delivered a speech to the masses in which he confirmed the Southern peoples call for Ben Dhager’s corrupt government to step down and for the people to move towards achieving the goals of the revolution which is independence with an independent federal state .

Brigadier Bamualm confirmed that the State of South Arabia is eminent and what is happening today in the capital Aden is a result of what the people of the south want whether they are in the country or abroad, adding, ‘As we have won against Ali Saleh yesterday we will be able to over throw Ben Dhager and his corrupt government today’.

On his part Ameen Saleh praised the role played by the Trade Unions in calling the people for the peaceful popular escalation which is calling for the corrupt government to step down, noting that the government is facing a peaceful rally with violence in return this action has forced the popular resistance ‘Al Muqawama Alganobia’,  to intervene to protect the rights of the people of the south.

On the same issue, representative of the Trade Unions Gamal Masoud announced that the union will suspend its program until further notice as a result of the recent developments.