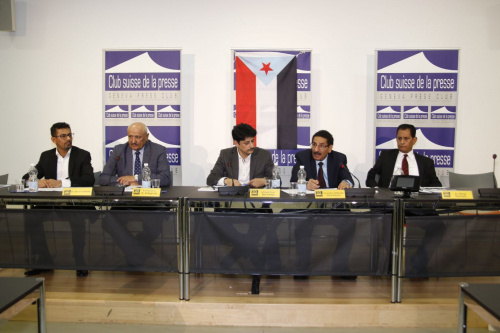 The Southern Transitional Council (STC), represented by the departments of Rights and Freedoms, and the Foreign Relations, in presence of a number of international organizations and Swiss press representatives, organized on Friday  in the Swiss Press Club, in Geneva, a political and human rights symposium entitled " Ignoring The Voice of The People of The South is a Violation of Human Dignity"

At the session opening of the symposium, which was broadcasted live to the Swiss media centers, the representative of STC Rights and Freedom Department - the consultant Abdulrahman Al-Mosibly, revealed the nature of the Southern Cause and its details, pointing out that the modern history has never witnessed a full state subjected to deception that led to wiping out its entity and eroding its identity and blurring its history as a result of a destructive war fired by the military forces of Sana'a regime in order to " Ending the existence of the State of the South". Calling the international community to support the people of South for the restoration of their free independent State.

For his part, the head of Foreign Relations Department at the European Union – Ahmed Omar Bin Farid, referred to the exposure of the people of the South to the abuse and deprivation of human rights and freedom fundamentals and muting their voices and getting them killed if they exercised their right for freedom of expression.

In a speech delivered by former South ambassador, Ali Abdullah Al-Bajeri, it was emphasized that the recent phase required the unity of the southern line in dealing with the misdeeds and corruption of the Yemeni government which failed in all aspects of life and increased the suffering and humiliation of the southern people and their lives.

For his part, the member of STC National Assembly – Dr. Effendi Al-Haji Al-Merkshi, presented a paper shows the inevitability of Southern Transitional Council existence as political benefit resulted from the struggles of the people of the South of a decade to achieve its national project of resorting the Southern State within the borders of 1990..

In a working paper presented by Dr. Moneer Abdullah Abouda – member of the Consultative Center for Rights and Freedoms, it stated the legal foundations of the international legitimacy for the right of the people of the south to self-determination, and the restoration of their independent state defined, based on the Charter of the United Nations and the provisions of the International Covenants on Human Rights, Vienna Convention on International Treaties and Security Council Resolutions on the situation in Yemen for the year 1994.

The deliberations of the symposium received attention of the attendees and a number of topics were discussed and clarified. The symposium was attended by the vice president of the southern community in Switzerland, Abdel Nasser Obaid, accompanied by a number of members of the community.