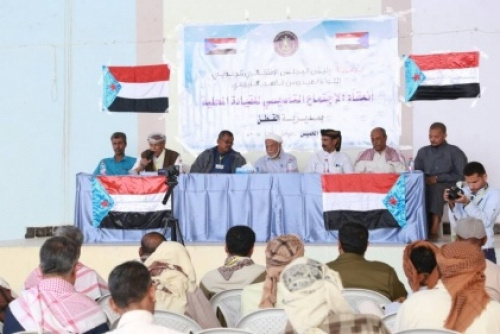 The meeting was held in the presence of the Supervisory Committee of Wadi Hadramout, represented by Naseeb Ahmed Al-Amiri - Head of STC in Hadramout, Ali Saleh Hamdoon - Head of the Department of Martyrs, Saleh Pattis - Head of Organizational Management, Mohamed Mohsen Al-Kathiri - Member of Supervisory Committee, Mohammad Hussein Al-Haddad - Member of the Governorate Leadership – Head of STC in Al-Katton district, and members of the national committee, members of the governorate leadership, heads and deputies of the local councils in the districts of Sayoun, Houra, and Rakhya.

The meeting started with reciting verses of the Holy Quran, then the southern national anthem. After that the Head of STC in Hadramout welcomed the members of the national committee and the local leadership in Al-Katton, he conveyed the greetings of the President of the Sothern Transition Council, Major General\ Eidaroos Al-Zubaidi, to the people of Hadramout in general and of Al-Katton district in particular, pointing that the upcoming tasks will lead to achieve the goal of independence accomplish, freedom, establishing the stat of law and order and protecting souls, stressing that the STC is the result of the revolutionists efforts of the resistance and the southern movement, in which the upcoming period required the cooperation and bonding of everyone to reach the goal of freedom and independence and building the stat of law and order.

On behalf of Mohammed Hussien Al-Haddad; the head of STC in Al-Katton district, Abdul-Azeez Al-Bakry – the head deputy, delivered a speech pointing that Aden historical announcement on 4 May last year stressed on the right of the Southerners to declare the Federal State of South, and the heroic role played by the southern resistance to defeat the Houthi militias from the South, he said that the South of today is not like the South before, in which the STC is the rightful representative of the people of the South from all the south provinces.

After that, the decree of the President of the Southern Transition Council was declared in article (1) by announcing the names of the members in the executive board in Al-Katton district, and article (2) that the regulations and decisions issued by the Southern Transition Council shall regulate the tasks, competencies and duties, and article (3) that this decision shall be implemented on its date and published in the Council's websites, social media networks and newspapers.