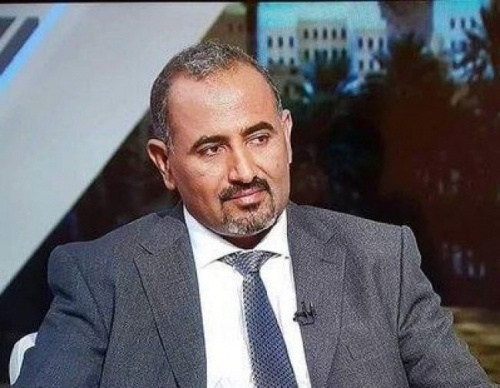 Aidarous  ِِAl-Zubaidi,  head of the South Transitional Council (STC), told Al-Monitor that the council stands with the Saudi-led Arab coalition against what he called the “rebels” in North Yemen, referring to the alliance between Ansar Allah (Houthis) and former Yemeni President Ali Abdullah Saleh, who leads the General People's Congress.

He said that he has forces fighting in areas in North Yemen alongside the coalition to defeat what he called the “Iranian project.” Zubaidi noted that the establishment of the council has nothing to do with his dismissal from his position as governor of Aden, saying that the idea of establishing the council came up a year ago. He asserted that the United Arab Emirates (UAE) has no goals and plans in South Yemen and that there is no disagreement between Saudi Arabia and the UAE regarding the war in Yemen. He also said that he was the first to uncover Qatar’s involvement in supporting terrorist groups in Aden and a number of areas in South Yemen.

Al-Monitor interviewed Zubaidi via email, on July 31, almost a month after his return from a tour that included Saudi Arabia, the UAE and Egypt. He visited Riyadh on May 11, where he met Saudi officers and briefed them on the progress of counterterrorism efforts and the achievements of the Aden security forces. Then, on May 19, Zubaidi traveled to Abu Dhabi, where he met with Crown Prince Sheikh Mohammed bin Zayed Al Nahyan and senior UAE officials. On May 24, he headed to Cairo, where he met former Yemeni President Ali Nasser Mohammed and stayed there until returning to Yemen on July 3.

The text of the interview follows.

Al-Monitor:  You toured Egypt, the UAE and Saudi Arabia. Who did you meet and what were the objectives of these visits?

Zubaidi:  I wanted to meet the Saudi-led coalition leadership to discuss the latest developments in South Yemen, especially after the announcement of the formation of the South Transitional Council. I was able to present the STC, its objectives and vision on many issues — such as crushing the Houthi coup and solving the social and security situation in the south. The visit to Saudi Arabia aimed to discuss how to face and defeat the ‘rebels’ and how to foil the Iranian expansionist project in the region. These same topics were discussed with Abu Dhabi Crown Prince Sheikh Mohammed bin Zayed Al Nahyan and senior UAE officials. Some development projects in South Yemen were also discussed.

In Egypt, I met with former [South Yemen] President Ali Nasser Mohammed and listened to his vision on the internal situation in Yemen and how to address internal affairs in South Yemen to obtain freedom and independence. It is not true that Mohammed opposes the formation of the STC; he is rather one of the supporters of this process. Meeting with Egyptian officials was not part of the visit. Another visit to Cairo is planned to discuss with Egyptian leadership issues of common concern. Egypt's role is pivotal and indispensable.

Al-Monitor:  How was the STC formed? Is this related to your dismissal from your position as governor of Aden by President Abed Rabbo Mansour Hadi?

Al-Monitor:  Why does the UAE support your movements and formation of the STC?

Zubaidi:  The UAE’s support to our people is a sincere and enlightened position stemming from the UAE’s long history in supporting vulnerable peoples in the face of injustice. When the UAE offered our people all this generous support — in terms of money and forces — it was not expecting anything in return. We have nothing to offer but our gratitude. Our people will never forget those who stood by them and offered them a helping hand in their ordeal. They will always appreciate the UAE’s support.

Al-Monitor:  Is the UAE planning a long stay in South Yemen?

Zubaidi:  Many rumors shroud the UAE’s intervention in South Yemen. Indeed, this country is helping rebuild our national army and working to secure the international waterway from the rebels’ coups and terrorist groups. This is a priority for the world, for the Arab coalition and for the region.

Al-Monitor:  So you are saying that the UAE has no plans or goals for Socotra Island and the port of Aden?

Zubaidi:  Those who are spreading these ridiculous rumors are those that have been hurt by the victories of the southern resistance and the Arab coalition. The UAE is reconstructing and rehabilitating infrastructure in Aden, Socotra and Hadramout. It is only natural for hostile parties to spread such malicious rumors. The southerners will not accept in any way to forsake any grain of dust from their homeland, you can be sure of that.

Al-Monitor:  How do you respond to those who say that your move reflects Saudi-UAE disagreements on the war in Yemen?

Zubaidi:  There are no disagreements and we do not plan on exploiting and betting on any disagreements between our Arab coalition brethren countries. The last position on the crisis with Qatar confirms the solid relationship between Saudi Arabia, the UAE and other Arab countries.

Al-Monitor:  What is your position on the current Gulf crisis?

Zubaidi:  From the very beginning, we were clear that we were against terrorist groups and any state that supports them, because we had suffered a lot from terrorism. It is thanks to the support of the Arab coalition, specifically the UAE, to the command of Aden security’s director Maj. Gen. Shalal Ali Shayea, to the sacrifices of soldiers and the solidarity of the southern citizens that we were able to defeat al-Qaeda, the Islamic State and the other terrorist groups amid difficult circumstances and in a short time. We were the first to take a position against Qatar as being involved in supporting terrorist groups in Aden and many liberated southern regions.

Al-Monitor:  Declaring independence requires an international decision. What are the messages that you have received from international parties?

Zubaidi:  The world is convinced that South Yemen is the most appropriate partner in combating terrorism, securing borders with its neighbors and preserving the security of the region and the international waterways. There is great satisfaction expressed by many countries and the outcomes will be positive, God willing.

Al-Monitor:  The waterway in the Red Sea is a red line for Egypt, the West and Gulf states. Therefore, clear agreements regarding this waterway must be reached before settling the issue of independence of South Yemen. What do you have to say about that?

Zubaidi:  The southerners proved to be a great partner in preserving stability and security in the region, including the Red Sea. Egypt and the entire world have witnessed how the south has been an active and faithful partner in securing this important international waterway. We are also ready to cooperate in order to protect this strategic waterway against pirates and thieves and anything that could be questioned by the international community.

Al-Monitor:  President Hadi’s loyalists and the groups that are said to be linked to Saudi Arabia began to move in Aden. Fighting erupts from time to time, even at Aden airport. How do you explain this?

Zubaidi:  These are the post-war repercussions. It is only normal for militias to emerge during this period and Aden is no exception. The coalition has been working for two years to bring back normal life to Aden, without resorting to violence and through understandings that led to the handover of the airport to the Aden Security Directorate. These sporadic events are usually blown out of proportion by the parties that are against the south and the coalition. At the end of the day, we are in times of war.

Al-Monitor:  You say that you are still part of the Arab coalition in the Yemeni war. Does that mean that you are still fighting in the north against the forces of Ansar Allah, i.e., the Houthis, and former President Ali Abdullah Saleh?

Zubaidi:  Yes, our soldiers remain stationed on many fronts — such as in Mocha in Taiz province — making sacrifices. They are also fighting side by side with the coalition forces on other fronts like Karash in Lahij governorate and Beihan in Shabwa governorate.

Al-Monitor:  Why are southerners fighting in the north?

Zubaidi:  Because we are part of the Arab coalition forces. There are strategic goals for this coalition led by Saudi Arabia. The STC supports the coalition to defeat the rebels, which is a key objective. One should not forget that the rebels are the ones who invaded, destroyed and killed in the south. We want to make sure that this will never occur again at the hands of these murderous groups.

Al-Monitor:  Is there any contact between you and northern leaders?

Zubaidi:  We do not have any problem with the people of North Yemen. Many intellectuals in the brotherly north support us and our people’s right to self-determination, in such a way to ensure good relations between the two brotherly peoples.