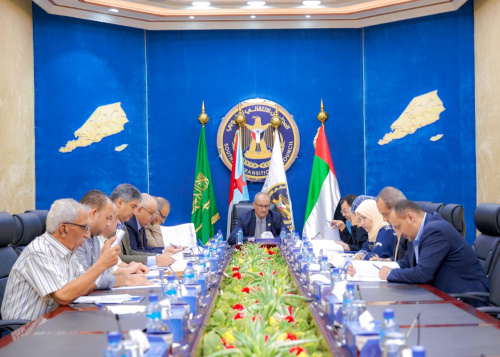 At the beginning of its meeting, the Presidium listened to the analytical monitoring report presented by the Decision-Making Support Center, which included a review of the latest political, military, and economic developments on the national landscape, in addition to what was reported by several international studies and research centers on subjects related to the cause of the South in international decision-making rooms and possible ways and mechanisms to effectively deal with such topics.

In another context, the Presidium listened to the briefing delivered by Mr. Anis Al-Sharafi, the deputy director of the General Directorate of Foreign Affairs (GDFA) about the external affairs and developments related to the cause of the South, foremost of which is the political and diplomatic movement in a number of countries in the region and the world to extend the international truce as a starting point for a political settlement to establish a sustainable peace. In this regard, the Presidium reiterated what had been stated by President Al-Zubaidi during his meetings with the ambassadors of the countries sponsoring the political process in our country; that the process should deal with reality on the ground and address the roots of the crisis, notably resolving the cause of the South in a way that meets the aspirations of its people and their right to self-determination.

In its meeting, the Presidium, too, discussed the report submitted by Dr. Suhair Ali Ahmed and Dr. Mona Basharaheel, members of the Presidium of the STC, on President Al-Zubaidi’s Youth Support Project, which included a comprehensive explanation of the phases of implementing the project, selection criteria, the achieved results, and the positive impact on improving the daily lives of the targeted youth, in addition to a brief review of the program of the second phase of the project, which will target the families of the martyrs, and provide supplies through performing projects that alleviate and improve their standard of living.

The meeting touched on the issue of the continued influx of illegal refugees from the Horn of Africa via smuggling boats to the capital, Aden, and called in this regard on the Office of the High Commissioner for Refugees and other relevant international organizations to coordinate efforts with the local authority and perform the roles in registering refugees and transferring them to shelter in camps as per the internationally followed procedures.

At the military domain, the Presidium praised the great heroic actions of the southern armed forces in confronting terrorist organizations in various areas of the South, praying to Allah, the Almighty, to bestow His vast mercy on the souls of the blessed martyrs who made the ultimate sacrifices to maintain security and stability in our country, and at the same time calling on citizens to cohesively cooperate with the armed forces and security to holistically eradicate the terrorist organizations.

To the end of its meeting, the Presidium touched on several topics and issues related to the work of the STC's bodies and took the appropriate measures.