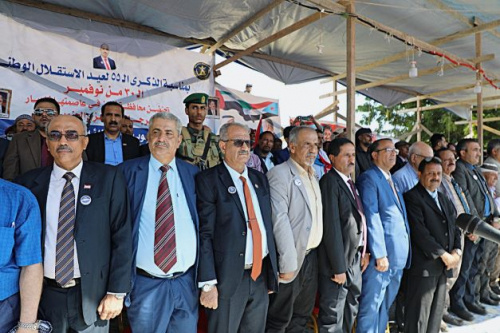 The city of Zanzibar, the downtown of Abyan Governorate, witnessed on Tuesday the major oratorical and artistic celebration organized by the executive body of the local leadership of the Southern Transitional Council (STC) in Abyan, on the national occasion of the 55th anniversary of the 30th of November, under the slogan "The South will only be with and for all its people." under the generous patronage of President Aidaroos Al-Zubaidi, the President of the STC.

The mass celebration, which was attended by Mr. Fadhl Mohammed Al-Gaadi, member of the STC's Presidium and deputy secretary general, in addition to members of the Presidium of the STC, like Brigadier General Nasser Al-Sa'adi, Mr. Saeed Sa'adan, Eng. Nizar Haitham, and Brigadier General Ali Al-Shaybah, as well as Dr. Mohammed Al-Zou'ari, minister of Social Affairs and Labour in the power-sharing government, opened with verses from the Holy Quran, followed by the national anthem of the South, and standing for a minute to tributedly read Al-Fatiha for the souls of the martyrs of the South.

Mr. Fadl Al-Jaadi delivered a speech in the celebration, commenced with conveying the greetings of the president Aidarous Al-Zubaidi, President of the STC, applauded the grand masses that gathered from all governorates of the South to celebrate the 55th anniversary of the glorious Independence Day ("November 30"), firmly pledging to the attendees to continue on the path of the revolutionists struggling to achieve full independence and to declare and build the state of the South, lauding the national spirit of the grand rally in this celebration, which coincides with the celebrations of the official brothers in the countries of the Arab coalition, and extending congratulations to the United Arab Emirates (UAE) on the momentous occasion of the 51st anniversary of the National Day, and the anniversary of the Emirati Martyr's Day.

Mr. Al-Gaadi stressed the importance of embodying the spirit of tolerance, reconciliation, and cohesiveness to confront the challenges facing the South, touching on the necessity to complete the implementation of the provisions of the Riyadh Agreement, pointing to putting a specific negotiating framework for the cause of the people of the South, and to grant the southerners the right of determining their political future, commending the southern forces that have been displaying the most heroic epics on various frontlines, appreciating their legendary steadfastness alongside their people in spite of distress and suffering, calling for raising military vigilance and keeping alert to confront the opponents of the South.

Mr. Mohammed Ahmed Al-Shaqqi, the head of the local leadership executive body of the STC in Abyan, gave a speech in which he welcomed all the attendees, reviewing several landscapes of struggle and sacrifices made by the free southern people, confronting whoever tries to undermine aspirations of its people or inflict harm on the homeland, mentioning the great achievements made by the southerners both at home and abroad on many different aspects and in all the varous stages.

Mr. al-Shaqqi explained that this grand rally represent clear messages and indications, foremost of which is that Abyan blesses and strengthens southern cohesiveness, rapprochement, in-group consolidation, and bridging the gap with concerted efforts and teamwork to overcome current and future challenges, indicating that the celebration in Abyan comes as a medal of honour to its people, who were born with struggling values throughout the various historical stages.

He affirmed the solidarity and support of the people of Abyan for the people of Hadhramaut and Almahra governorates, in their struggle to liberate the Valley of Hadramout from the occupation and domination of the militia of the First Military Division to manage their affairs and prevent

looting and sabotage of the resources, and to preserve the social fabric from the evil forces of Brotherhood that aim to tear it apart, calling on the Presidential Leadership Council (PLC) and the power-sharing government to take firm practical measures to protect citizens from the clutches of hunger, corruption, and the systematic destruction of public service.

Furthermore, a number of speeches were delivered by the participants in the mass celebration, which was also attended by heads of departments in the General Secretariat, local leadership executive bodies, academic personalities, dignitaries, notables, sheikhs, military and security officers, social and political figures, women and civil leaders, included many artistic and lyrical paragraphs and poems that acquired the approbation of all.