While Receiving the Swedish Ambassador... 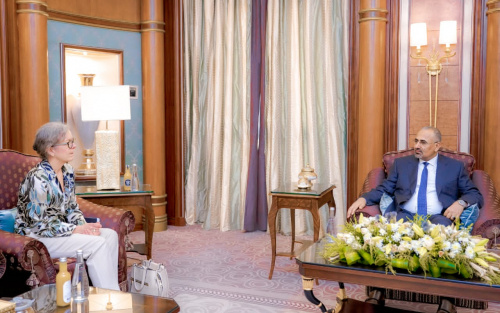 President Aidarous Qassem Al-Zubaidi, the President of the Southern Transitional Council (STC) and Deputy Head of the Presidential Leadership Council (PLC), at his residence in the Saudi capital, Riyadh, on Sunday evening, met with H.E. Ms. Petra Menander, Ambassador of the Kingdom of Sweden, accredited to the Kingdom of Saudi Arabia, the Sultanate of Oman and Yemen.

At the beginning of the meeting, President Al-Zubaidi welcomed the Swedish ambassador, lauding the strong relations between our country and the Kingdom of Sweden over the past years and the pivotal role played by Sweden in promoting peace endeavours in the entire region.

The meeting discussed the exerted efforts by the United Nations, the regional and international communities to extend the UN-mediated truce, in addition to supporting the PLC and the power-sharing government to accomplish the assigned tasks of establishing security and stability in the liberated governorates, and reviving the deteriorating economy.

In this respect, President Al-Zubaidi reiterated the keenness of the STC and the PLC to deal positively with all international and regional initiatives aimed at extending the truce to move towards reaching a comprehensive peace in the entire region, stressing that the Houthi militias will remain a stumbling stone because of their continuous breaches and non-compliancy with their obligations.

In the course of his speech, President Al-Zubaidi pointed out that the Houthi militias are only proxies of the Iranian regime, and they will continue to be driven by Iran whenever it wants.

The president indicated that the PLC will deal positively with serious efforts to extend the truce in appreciation of the humanitarian situation, while all options will remain open to protect the security and stability of the liberated areas.

For her part, the Ambassador of Sweden affirmed the support of the PLC and the paid efforts to normalize life, consolidate security and stability, revive the economy, and promote endeavours to establish peace in the entire region.

The Swedish Ambassador has also reiterated her country's position in supporting the endeavours of the UN Special Envoy, Mr. Hans Grundberg, to cease the war and achieve a sustainable peace sponsored by the United Nations and the regional and international communities.