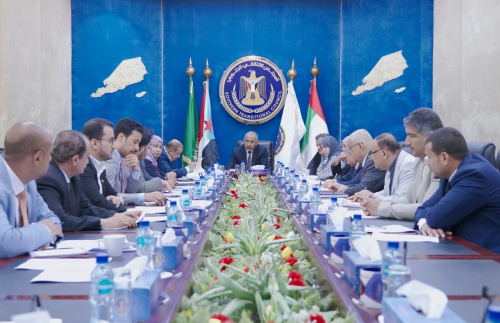 The Presidium of the Southern Transitional Council (STC) held its periodic meeting, on Saturday, chaired by President Aidarous Qassem Al-Zubaidi, the president of the STC.

Initially, Presidium listened to an overall report by the Minister of Electricity in the Power-sharing government, Eng. Mane'a Ben Yameen, in which he reviewed the ministry’s situation, the accumulated troubles encountering the leadership of the ministry, the obstacles that hinder its work, the efforts made to improve the service of electricity, and the strategic plans to solve deficiency in the electricity supply in the capital, Aden, and the liberated governorates, in upcoming summer.

In this regard, the Presidium affirmed its support for the endeavors of the minister aimed at correcting imbalances, eliminating corruption hotbeds in the main offices of the ministry, launching to implement strategic projects for generating electricity,

working on upgrading lines of force in the electrical field and removing unlicensed connection to reduce wastage.

In this context, the Presidium urged the Prime Minister and the Ministry of Finance to support and assist the leadership of the Ministry of Electricity in accomplishing its tasks by quickly issuing the financial transactions without delay, in a way that enables the Ministry to fulfill its obligations, and to move forward with its plans to expedite getting solutions for the electricity crisis and prepare for the upcoming summer, as well as the necessity of activating the role of the Central Organization for Control and Auditing to combat corruption in all ministries, and to expose corrupted elements in state institutions, and hold them accountable.

Politically, the Presidium listened to a briefing by a member of the Presidium, Head of the Negotiations Affairs Unit, Dr. Naser Mohammed Al-Khubaji, about the paid visit of the STC's team to Berlin, the German capital, and the outcomes of its meetings with German officials, further to prospects for strengthening bilateral relations, and the German role in pushing the peace process in the entire region in line with the changes on the ground to meet the aspirations of the people of the South and their accrued-right to self-determination and drawing their future.

In a separate context, the Presidium discussed the regional and international movements aimed at extending the UN truce and advancing the peace process. In this respect, the Presidium reaffirmed the STC's positive position for establishing peace and supporting the endeavours of the UN special envoy to build a sustainable peace, referring to any talks about extending the truce is mainly related to the extent to which the truce provides the elements of peace in the South, the participation of the STC in the negotiations to achieve it, and the extent to which the Houthi militias adhere to the truce requirements and respect their commitments.

To the end of the meeting, the Presidium stood before the developments on the southern national landscape, in addition to several organizational issues related to the work of the STC, and took the necessary measures in such regard.