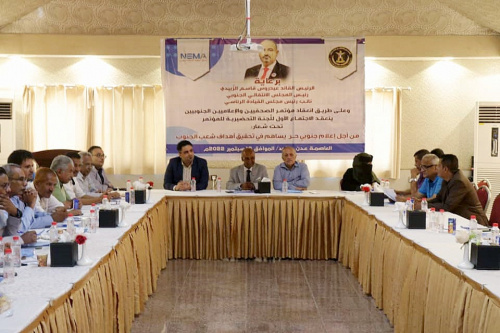 The Preparatory Committee (PC) for the Southern Journalists and Media Members Conference (SJMMC) held its first meeting, on Sunday morning, in the capital, Aden, under the slogan “For Free Southern Media that Contributes to Fulfilling the Goals of the People of the South,” under the generous patronage of President Aidarous Qassem Al-Zubaidi, the president of the Southern Transitional Council (STC) and deputy head of the Presidential Leadership Council (PLC).

At the meeting, which began with a minute of standing to tributedly read Al-Fatiha for the soul of the media martyr Nabil Al-Quaiti and all the martyrs of the South, Mr. Mukhtar Al-Yafe'y, deputy head of the National Southern Media Authority (NSMA), delivered a speech at the beginning of which he conveyed the greetings of President Aidarous Al-Zubaidi, the president of the STC, and the greetings and blessings of NSMA's headship to hold the first meeting of the Preparatory Committee of SJMMC.

Mr. Al-Yafe'y indicated that the upcoming SJMMC will represent a milestone in the history of contemporary southern media, pointing out that the goal is to convene the voice of the southern media in spite of its various orientations to express the collective free will of the people of the South.

Al-Yafe'y noted that the call for this comprehensive conference projects the heyday of activities for the southern media institutionalization, which launched with the establishment of NSMA, and will definitely continue to restore the activities of media institutions.

To the end of his speech, the deputy head of NSMA wished all success for the PC in the work of its first session, and that it would come up with executive decisions and practical measures that would create the conditions for the success of holding the general SJMMC.

During the meeting, a chairperson, a deputy, and a media spokesperson for the PC were elected, as well as the approval and designation of the chairpersons and members of the sub-committees, and determining the tasks that they will undertake with a specific timetable for the completion of these assigned tasks.