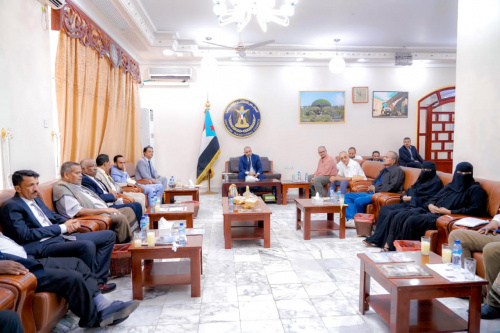 President Aidarous Qassem Al-Zubaidi, the president of the Southern Transitional Council (STC) and deputy head of the Presidential Leadership Council (PLC), on Thursday, met at his office, in the capital Aden, with the Political, Bureau of the Supreme Council of the Revolutionary Movement (SCRM) headed by Mr. Fadi Hasan Baoum.

At the beginning of the meeting, the president welcomed the head and members of the Political Bureau of the SCRM, lauding the proactive struggle roles played by the leaders of the SCRM since the launch of the southern liberating revolution, their patriotic positions; and steadfastness on the principle for which the people of the South sacrificed trains of the wounded and martyrs.

In the meeting, which was attended by Mr. Fadl Mohammed Al-Gaadi, Deputy Secretary-General of the Presidency of the STC, and Mr. Abdullah Saleh Muqbel, Head of the Administrative and Financial Department of the General Secretariat, the president lauded the positive interaction from the leadership of the SCRM with calls for the Southern Dialogue, and its keenness to achieve cohesiveness, rapprochement, and in-group consolidation to preserve the social fabric, and uphold the high interest of the south.

President Al-Zubaidi emphasised that the South is passing through the labour pains of political battle to move from the stage of revolution to the stage of state building, which requires openness and acceptance of all, noting that the variations and differences in visions are normal as long as we have shared goals and common destiny.

The president expressed his confidence in the keenness of the various components, forces, and political figures in the South and its just cause to follow in the footsteps of the SCRM, and to deal effectively and positively with the calls for cohesiveness, and to engage in partnership with all national forces, to remember and honour the sacrifices made by the people of the South, and to preserve their gains and achievements, to ensure a secure future for the people in the homeland where all are partners in wealth and power.

After that, President Al-Zubaidi listened, from the head and members of the SCRM, to a set of opinions and suggestions that would enhance joint national action, and possible ways to form a united front against all conspiracies being hatched against the South and its cause.

To the end of the meeting, the members of the SCRM confirmed that southern cohesiveness has always been and will definitely remain the goal of the loyal southern forces, valuing the tremendous efforts made by President Al-Zubaidi on this path. In the same context, they have affirmed their full readiness to engage in a complete partnership with the STC under the leadership of President Al-Zubaidi, as the all-inclusive polity that brings together all components and national forces of the South.