President Al-Zubaidi Gets Briefed on Readiness of Alghaidhah Axis

President Al-Zubaidi Gets Briefed on Readiness of Alghaidhah Axis 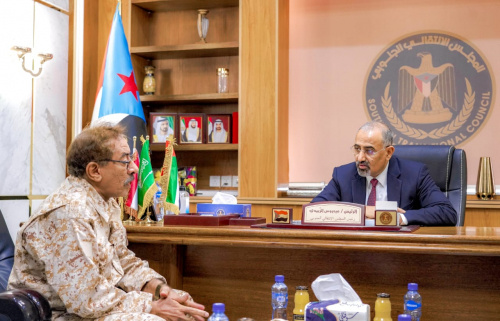 President Aidarous Qassem Al-Zubaidi, the president of the Southern Transitional Council (STC), Supreme Commander of the Southern Armed Forces, and deputy head of the Presidential Leadership Council (PLC), at his office, in the capital Aden, met with Brigadier General Faisal Mohammed Ahmad Al-Matari, Commander of Alghaidhah Axis in Almahra Governorate.

In the meeting, President Al-Zubaidi listened from Brigadier general Al-Matari to a brief explanation on the latest developments in the city of Alghaidhah, and Almahra Governorate in general, and the tasks undertaken by Alghaidhah axis to maintain security, stability and public tranquility in the governorate.

The President, too, was briefed by Al-Matari on the level of readiness of the combat brigades and military units of the axis, and the efforts of the Axis Command to raise the capabilities of soldiers, officers, and noncommissioned officers, so that they can efficiently and effectively perform their assigned tasks.

President Al-Zubaidi stressed the importance of redoubling efforts and raising the level of operational coordination between all military and security units in Almahra Governorate, to establish law and order, curb lawbreakers, securing land and sea ports, and controlling whatever concerns the public tranquility of citizens.

To the end of the meeting, Brigadier general Al-Matari offered thanks to President Al-Zubaidi, for his continuous following up of the conditions of the military axes, including Alghaidhah axis, and his interest and keenness to provide all their requirements and needs to efficiently implement the assigned tasks.