Ben Brik Meets with Head of Peace Congress of Women

Ben Brik Meets with Head of Peace Congress of Women 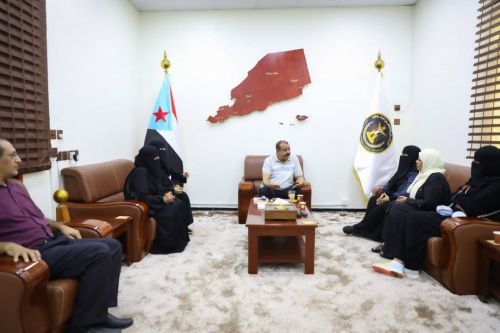 Major General Ahmed Saeed Ben Brik, Chairman of the National Assembly of the Southern Transitional Council (STC), received, on Thursday, at the headquarters of the Assembly, Ms. Rasha Ben Hamel, head of Peace Congress of Women and the accompanying members.

In the meeting, Ms. Madina Adlan, Secretary-General of the Congress, gave a brief explanation about the theme of ​​the Peace Congress of Women and the goals it seeks to bring to the South in general, affirming that the leadership of the Congress works with self-sufficiency and without prejudice to any of the conflicting and fighting parties on the ground; for the purpose of achieving the top longed-for goal, which is to spread peace throughout the South.

Major General Ahmed Saeed lauded the goals of the Congress and its efforts to bring peace to the entire South.

The meeting was attended by Dr. Salma Bazre'a, deputy head of the Health Committee in the National Assembly and Dr. Doa'a Salem Bawazeer, Head of Woman and Child Administration in the Local Leadership Executive Body of the STC in Hadhramaut Governorate, member of the Preparatory Committee of the Congress, and Ms. Najat Saeed Al-Juhi, Head of the Organizing Committee of Peace Congress of Women.