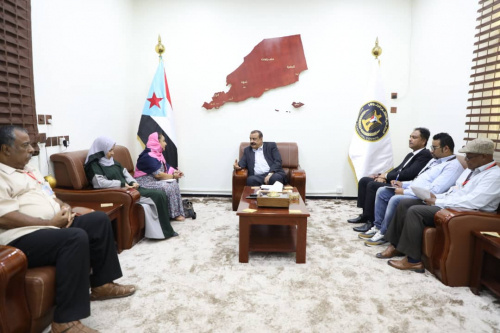 Major General Ahmed Saeed Ben Brik, Chairman of the National Assembly of the Southern Transitional Council (STC), received, on Wednesday, at the headquarters of the Assembly, Ms. Dina Al-Ma'amoun, the regional director of CIVIC Organization.

In the meeting, which attended by lawyer Niran Souqi, member of the STC's Presidium, deputy chairperson of the National Assembly, Ms. Dina gave an explanation of the activities of (Civic Organization) and discussed ways to support the protection of civilians and develop their capabilities, in addition to raising the awareness of the security and military forces on the international norms and human rights, and training them on the ways of taking the necessary measures to protect civilians during military and security operations.

In the meeting, Major General Ben Brik affirmed that the leadership of the STC is keen to protect civilians, and preserve their civil rights, as well as educating, training and qualifying the security and military forces, and continuously raising their competence.

Ben Brik pointed out that the southern armed forces and security services are fighting the battle against terrorism, securing the lives of citizens from the multi-faced danger and maintaining the pillars of security and stability.

Noteworthy that the cowardly treacherous terrorist operation that targeted our southern forces yesterday and affected the valiant servicemen and officers in Abyan Governorate, will never be gone unheeded and the counteract will shortly be firm and tough.

He emphasized that we will not remain silent and will not 'sit idly by' against these brutal attacks.

The meeting was attended by Mr. Fadi Hasan Ba'oum, Head of the Political Bureau of the Revolutionary Movement Council, Mr. Saqr Manquosh, Program Officer in the Armed Forces, Mr. Awad Ba'abaid, head of Safety, and Mr. Salem Jaafar Ben Brik, a leader in the Movement.