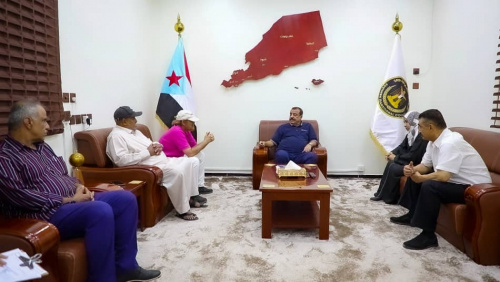 Major General Ahmed Saeed Ben Brik, Chairman of the National Assembly of the Southern Transitional Council (STC), on Wednesday, met with Dr. Mohammed Ali Mattash, head of the Supreme Economic Committee (SEC) in the STC and Eng. Ahmed Saleh al-Wali, Head of the Oil Committee in the SEC.

In the meeting, which included two members of Presidency of the STC; Lawyer Niran Souqi, Deputy chairperson of the Assembly and Brigadier General Naser Al-Sa'adi, Major General Ben Brik was briefed by Dr. Matash and Engineer Al-Wali, on the latest developments in the economic landscape in the country.

Likewise, the meeting touched on several topics, mainly the reshuffling taking place in the ministries, and the Ministry of Oil in particular, stressing the importance of appointing new bloods and efficiencies capable of effectively managing and moving ahead; since they should be selected as per experience, qualification, and integrity.

Ben Brik lauded activities and work of the SEC, hoping the new leadership in the ministry will bring about positive changes on the ground in the economic aspect; to serve the citizens in the South, furthermore, he highlighted establishing a database for each ministry and institution, related to all governorates of the South, with aim of filling job vacancies according to high specialized majors and competencies.

To the end of the meeting, they agreed to support the Ministry of Oil to boost its levels of performance for the best.

The meeting was attended by Eng. Obaid Mohammed Ba-Qais, member of the Oil Committee, and Mr. Ahmed Qassem, head of office of chairman of the Assembly.