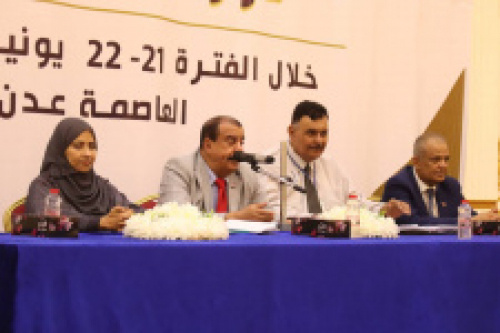 The National Assembly, on Wednesday, in the capital Aden, concluded the work programme of its fifth session which was held during the period 21-22 June, 2022, under the slogan; "The Southern Cohesiveness for Lasting Peace, Creative implementation of the Outcomes of Riyadh Agreement and Consultations, and Right of the South to Restore its State." On the closing day, Major General Ahmed Saeed Ben Brik, Chairman of the National Assembly, chaired the sessions, in the presence of his deputies, lawyer Niran Souqi, Mr. Lotfi Shatara, members of Presidency of the STC, and Dr. Anis Luqman, and he spoke on the importance of reinforcing the South and the southerners against all hatched conspiracies. Ben Brik indicated that the National Assembly holds its sessions to confirm that it has visions, missions and goals for the South, its people and land, emphasizing on decisions and recommendations that will come out in the fifth session of the Assembly and related to all aspects concern the interest of the South and the southerners, and will do the best to reach the highest levels. The second day of the session reviewed reports related to axes of the fifth session of the Assembly, which included the evaluation report on the performed activities and tasks of the Assembly during the period between the fourth and fifth sessions and related to issues of the South, as well as a report on the outcomes of Riyadh consultations, its latest developments and mechanisms of implementing it on the ground. The National Assembly has also reviewed in its fifth session a report on restructuring the STC and updating its documents, and discussed the main orientations of the Assembly's plan for the year 2022, which included its work plan and a draft of modernizing and redeveloping the STC's system. To the end of the session, the discussion was opened for members of the Assembly to speak about the reports that were reviewed and to make valuable suggestions and perceptions related to what was presented, where rich debates took place to arrive at decisions and recommendations to be adopted and approved, through which the final statement of the Assembly's fifth session will be put down in writing.