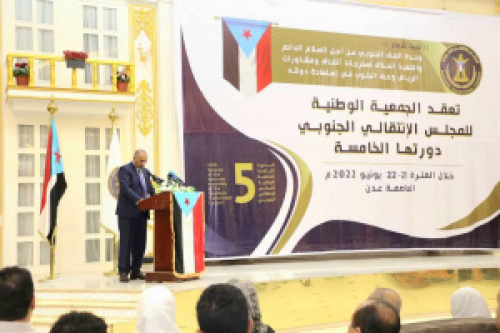 The president Aidarous Qassem Al-Zubaidi, President of the Southern Transitional Council (STC), Supreme Commander of the Southern Armed Forces, Deputy head of the Presidential Leadership Council, on Tuesday, in the capital Aden, along with Major General Ahmed Saeed Ben Brik, Chairman of the National Assembly, and Mr. Ahmed Hamid Lamlas, Secretary-General of Presidency of the STC, Minister of State, Governor of the capital Aden, inaugurated the work of the fifth session of the National Assembly, which is held under the slogan; "The Southern Cohesiveness for Lasting Peace, Creative implementation of the Outcomes of Riyadh Agreement and Consultations, and Right of the South to Restore its State."

The opening session was attended by many members of presidency of the STC, ministers in the power-sharing government, heads of local leadership executive bodies of the STC in the governorates of the South, administrative body of the National Assembly and members of the Assembly, in addition to heads of various bodies, departments and committees of the STC, as well as a number of guests; including social and political personalities, military and security commanders, and local and Arab media members.

The president Aidarous Al-Zubaidi delivered a speech at the begining of the fifth session of the Assembly, in which he expressed his pleasure to participate in inaugurating the activities of this session, pointed out that the STC has been shouldered the national responsibility since Aden Historic Declaration day, in exceptional circumstances, relying, surely after the help of Allah, on the Will and right of people of the South, for which they have made precious sacrifices, and the STC will definitely continue to bear this responsibility until fulfilling the aspirations of our people.

The president Al-Zubaidi stated that the STC is keen to firmly consolidate the course of institutional work in its bodies as a national task on the path of reaching an organized construction to initialize shaping of the State in the South, stressing on the level of strength and political presence that the southern cause has regionally and internationally reached, as it was not an easy matter, but it was done with the Southern Popular Will that has been dictated in documents and literature of the STC, which were stronger than all challenges.

In his speech, the president Al-Zubaidi reiterated that the southern homeland is for all southerners with no exception, ensured on keenness to join the southern forced as the southerners have surely and commonly the same common goal, referred to the External Southern National Dialogue Team (ESNDT) that has gratefully been exerting immunse efforts in such context, and time has come to conduct a parallel dialogue from inside the homeland to ensure achieving the common goals and the participation of the various components of our people in shaping the future characteristics of the State of the South.

The president Al-Zubaidi affirmed that the Negotiations Affairs Unit (NAU) has been directed to communicate on forming a southern national delegation led by the STC with the participation of various southern qualified personalities to represent cause of people of the South, stressing the tireless efforts for a broader representation of our people and its active components within framework of the STC as a comprehensive national polity through restructuring its institutions and bodies.

The president Al-Zubaidi said that the partnership with the countries of Arab coalition led by the Kingdom of Saudi Arabia and the United Arab Emirates is a source of pride and great importance, and the challenges facing the coalition countries can be perceived as encountering us, too, and we all collaborate to confront and find ultimate solutions to these challenges, referring to that participation in Riyadh Agreement, whose contents are still valid and firm, and the work should be continued to implement it, as an essential part of the partnership in the Presidential Leadership Council (PLC), which has come as response to the crucial circumstances, including the completion of implementing Riyadh Agreement and performing economic and military reforms, offering gratitude to the official brothers in Saudi Arabia, UAE and Kuwait for their quick response to treat the urgent files and support service projects.

The president Al-Zubaidi highlighted the comprehensive peace that ensures restoration of the South to its people through a comprehensive political process, according to provisions of Riyadh Agreement and outcomes of the Consultations sponsored by the General Secretariat of the Cooperation Council for the States of the Arab Gulf (GCC) and active presence on the ground, emphasizing on supporting the UN truce, protecting our strategic territories and securing the vital international shipping lines, calling on countries of the coalition and the international community to contribute in the efforts of counter-terrorism.

The president Al-Zubaidi concluded his speech by calling on all Yemeni parties, polities and political elites to unite their efforts through a serious dialogue that addresses causes of the conflict in the North, in the meantime, assured of staying by their side in peace and war, and also asserted full support for the National Assembly in all its national tasks and to be by their side on the firm pledge, the pledge of one word men.

Initially, Major General Ahmed Saeed bin Brik had delivered an opening speech in which he welcomed the president Aidarous Al-Zubaidi and all the attendees, shedding light on media members; especially the Egyptians, who attended inaugurating session of the Assembly, noting that the fifth session of the Assembly comes at crucial moments and difficult circumstances after Riyadh consultations, where members of the Assembly will focus on studying the outcomes of Riyadh consultations and what was previously implemented, based on assuming the assigned national responsibility they have been shouldered, and the decree of the president Al-Zubaidi, especially with the course of pressing matters and what is taking place in the South and the suffering of its citizens.

The chairman of the National Assembly said that during this session a road map for the STC, its bodies and branches will be defined, pointed out that we were in a struggle for existence and emerged triumphant with the triumphant coalition and won on the ground after offering trains of martyrs and the toll is growing until fulfilling the determined national goals.

Major General Ben Brik declared that we are dealing with the existing state for interests and required service of our people in the capital Aden and the rest governorates of the South, stressing the vital role of the president Al-Zubaidi in Riyadh consultations to consolidate and bringing triumph to the coalition's position, and to come up with a summary of the road map related to the formation of the PLC, hoping that this council will direct the forces to confront Houthis, and wishing that the PLC will be emancipated from constraints and work to implement on table agendas; in the military and economic aspects.

Ben Brik stated that we are working to score a victory to the Arab Project and find solutions to the crises in service and paying salaries, emphasized that the people of the South will never abandon any accomplished achievements, adding that the National Assembly during this session is going to have essential decrees that include resources related to electricity, water, education, health and salaries, as well as investment opportunities that can be benefited from it, and all troubles will be examined, calling on getting benefitted from the southern expertise and competencies to overcome all crises.

Ben Brik ended his speech by emphasizing on orientations of the Assembly that will determine the compass of the future and will define its mechanisms and solutions in urgent issues of economy, service,..,etc., noting that the South has sacrificed many martyrs to raise its flag and they will never be forgotten, furthermore, the PLC is a hope for people of the South and people of the North, therefore, all of us will stand with the president Aidarous Al-Zubaidi in the PLC, in assurance and confidence that he is an honest leader to be shouldered our cause that for its sake the martyrs has sacrificed their precious souls.

It is worth to mention that the first day of the fifth session has begun with reciting verses from the Holy Quran, and followed by the Southern National Anthem, then a documentary film has been prepared by the Media Committee in the Assembly entitled; “Restoring a Homeland” was screened about the different stages that the South has been passing through it since the unification, until the formation of the STC and the current period, too, in this opening session of the Assembly a poem was applaudably read and acquired the approbation of all.