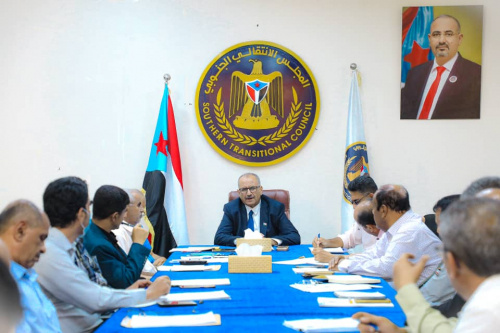 General-secretariat of the Southern Transitional Council (STC) held its Periodic meeting, on Wednesday, in the capital Aden, chaired by Mr. Fadhel Mohammed Al-Jaadi, Deputy of the secretary general,

The meeting was briefed on the STC's participation in Riyadh consultations hosted in the Saudi capital, Riyadh, and resulted decisions, including the formation of the Presidential Leadership Council.

The meeting reviewed a report on the political scene submitted by the Political Department, which has included the most prominent events and developments in the South during the last period.

The meeting also discussed the performance report of the Legal Department's work during the first quarter of 2022, which contained the prominent accomplished activities and connected organizational tasks, during the mentioned period.

In addition to that the meeting focused on developments in the capital, Aden and other governorates of the South, as well as issues related to activities of the departments in the General Secretariat; where suggestions that can lead to support and develop the work were presented.

The meeting listened to a report on job discipline of cadres of the General Secretariat's departments submitted by the Department of Financial and Administrative Affairs, which included details of the attendance level for the employees of each department during the month of March, 2022, and the level of job commitment.

The meeting had also reviewed and approved the weekly activity report in the departments of the General Secretariat,