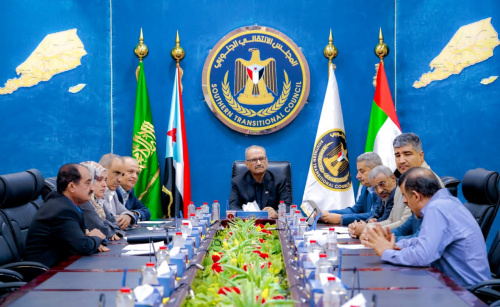 At the beginning of its meeting, the members of the Presidency stood for a minute of mourning to read Al-Fatihah for the souls of the martyrs of the South of the Giants Forces, and the people of Shabwa governorate, praying to Allah Almighty to bless them with mercy and forgiveness, and to grant the wounded a speedy recovery.

The Presidency saluted the southern victories that were achieved in the districts of Usaylan and Bayhan in Shabwa governorate, warning of the dangers of influential Brotherhood leaders in the governorate seeking to embrace the Yemeni Brotherhood militias fleeing from the front lines in Marib and Bayhan, and regrouping them in the governorate capital, and directing them to implement new schemes, to confuse the security situation in Ataq and the rest districts, and extinguishing the flame of the southern victory on its borders with the Houthi militias.

In the context, the Presidency called on the leadership of the coalition to stop the recklessness of these leaders who are trying to put obstacles in the way of the movements of the leaders and soldiers of the southern Giants brigades, the leaders of the Transitional Council and its supporters within the framework of the governorate’s districts and its fronts, and to quickly push them and other Brotherhood forces in Al-Mahra, Shokra, and Hadhramout Valley to the frontlines of confrontation against the militias of Houthis in Marib and Al-Bayda in order to liberate them.

The Presidency also stressed the importance of accelerating the local leadership in the governorate to make ready its headquarters in the city of Ataq, to ​​be able to perform its role and activate its performance in all districts of the governorate.

In its meeting, the Presidency touched on the developments of the economic situation, and warned of the dangers of the continued control and manipulation of influential symbols of corruption in the currency exchange rate, renewing its demand for the government of power-sharing and the leadership of the Central Bank, to work seriously and quickly to control the currency exchange rate and stop its manipulation, and also renewed its willingness to provide everything necessary to help in this regard . 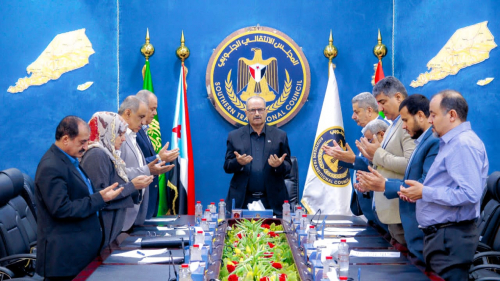