President Al-Zubaidi Gets Briefed on Ministry of Health Workflow

President Al-Zubaidi Gets Briefed on Ministry of Health Workflow 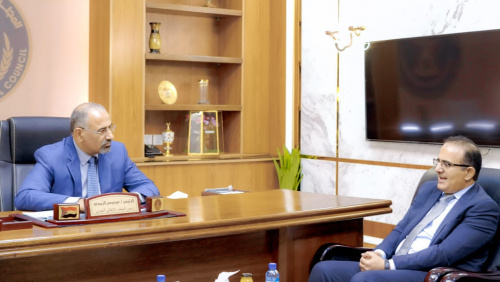 President Aidarous Qassem Al-Zubaidi, the president of the Southern Transitional Council (STC), Deputy head of the Presidential Leadership Council, on Sunday morning, at his office, in the capital Aden, met with Dr. Qassem Buhaibah, the Minister of Public Health and Population in the power-sharing government.

In the meeting, the president was briefed on the progressing work in the Ministry of Health and the efforts made by the officials of the Ministry to provide better health care for citizens, stressing the importance of intensifying efforts to raise the level and improve the efficiency of health care and treatment service in central public hospitals and health care centers in rural areas, which contributes to alleviating the suffering of residents.

For his part, Mr. Buhaibah expressed his thanks and appreciation for the tremendous efforts made by President Al-Zubaidi to support the ministry's endeavours to perform its duties to citizens.

The meeting was attended by Dr. Salem, Undersecretary of the Ministry for the Population Sector, and Brigadier General Kamal Hamshary, Office Director of the President of the STC.