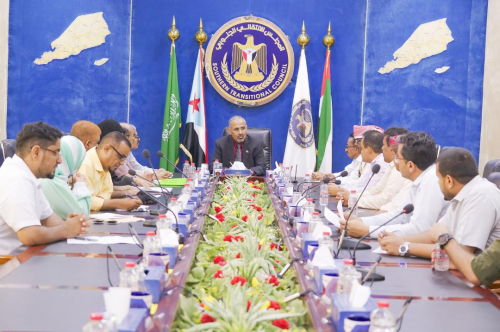 In the meeting, President Al-Zubaidi praised the efforts made during the past period, calling, at the same time, to make more efforts that would enhance the effectiveness of mass activity in the capital, Aden, in particular, and the governorates of the South in general.

President Al-Zubaidi stressed the importance of the great role that mass action should play, in strengthening communication with the various groups of southern society, and consolidating the principle of tolerance and reconciliation among the people of the southern homeland, in addition to clarifying the message and objectives of the Transitional Council that aimed at restoring the state of the South with full sovereignty on its borders of before 22 May 1990.

President Al-Zubaidi stressed the importance of intensifying meetings and visits that help developing and strengthening public action, and raising the pace of work and activity of this important sector, through the process of coordination and cooperation, and unifying work efforts between the public committee in the National Assembly and the public department in the General Secretariat in accordance with their joint plans and programs.

For their part, the attendees from the Public Committee in the National Assembly, and the Public Department of the General Secretariat, valued the great efforts made by President Al-Zubaidi, expressing thanks to him for his interest and follow-up to mass works and activities, and to look at the problems and difficulties facing their work, and finding appropriate solutions and treatments for them.

They provided to President Al-Zubaidi a detailed explanation of the workflow of the committee and the department, and how to develop public work in the Council, and the future plans they will work on, and the activities to be implemented during the coming period, in addition to the works and activities that have been implemented, and the most important difficulties they faced during the past period.

https://en.stcaden.com/news/9796
You for Information technology