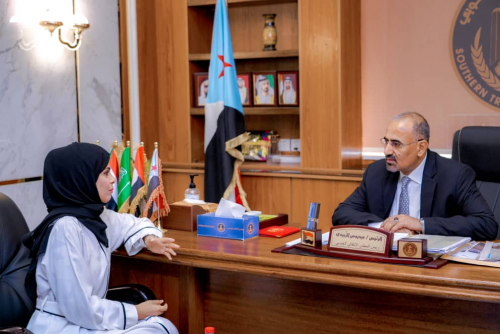 The President of the Southern Transitional Council, President Aidarous Qassem Al-Zubaidi, met on Sunday, with Ms. Huda Al-Kazmi, Director of the Information Office in the capital, Aden, and member of the National Southern Media Authority.

At the beginning of the meeting, President Al-Zubaidi welcomed the Director of the Information Office, and listened to a full explanation of the office’s role and the efforts it has made during the past period, stressing the great role played by media platforms as mirror of the general reality, without any increase or decrease.

President Al-Zubaidi pointed to the heavy responsibility placed on media, as the fourth authority, and the citizen's eye and tongue, to expose and reveal the corrupts and corruption, and an effective tool to support the institutional reform efforts in all state institutions and sectors.

President Al-Zubaidi urged the Information Office to provide support to the local and international, governmental and private media outlets, to carry out their assigned role.

For her part, Al-Kazmi expressed thanks to President Al-Zubaidi for giving her the opportunity to meet him, and listening to her vision to advance the reality of media and media institutions, indicating that the measures taken recently are not directed against anyone in particular, and their main goal is to organize the work of the media in the capital, to ensure that they carry out their mission to the fullest.

Al-Kazmi praised the support provided by the President of the Southern Transitional Council, President Aidarous Al-Zubaidi, as well as the support of Mr. Ahmed Hamed Lamlas, the Secretary-General of the Presidency of the Council, Governor of the capital, Aden, to restore the media in Aden the capital to its previous and leading position, and to overcome the difficulties facing its work.

https://en.stcaden.com/news/9782
You for Information technology