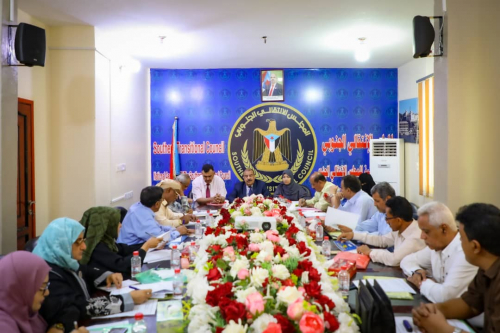 The meeting was attended by the two Vice-Chairmen of the National Assembly, Lawyer Niran Souki, member of the Presidency of the Council, and Dr. Anis Luqman, in which it was devoted to reviewing the latest preparations for the fourth session of the National Assembly to be held on June 16-17, under the slogan "Completing implementation of Riyadh Agreement is our demand and restoring the state is our goal."

In a speech during the meeting, Major General bin Brik stressed the importance of good preparation for the session through the administrative body and sub-committees formed to prepare for it, due to the great importance that this session represents for the South and the region in general.

Major General bin Brik indicated that the axes of this session will focus on the reports of the governorates, with their included negatives and positives, both in services and sectors related to citizens' lives, in addition to the weakness of the authorities in the governorates of the South.

https://en.stcaden.com/news/9652
You for Information technology