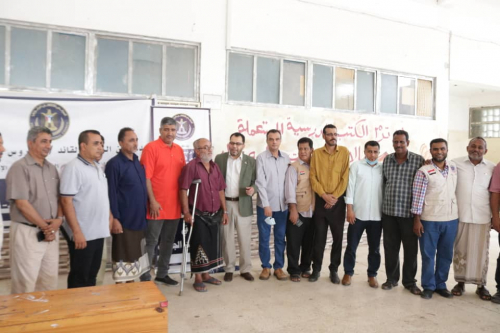 Eng. Adnan Al-Kaf, member of the Presidency of the Southern Transitional Council, Acting Secretary-General of the Presidency, Chairman of the Relief and Humanitarian Work Committee, along with Eng. Nizar Haitham, the member of the Council's Presidency, Head of Transitional Council Executive in Aden the capital, launched  on Monday, a project to distribute food baskets to families of martyrs in the governorates the South.

In the inauguration ,Al-Kaf pointed out that this project comes under the direction and patronage of President Aidaroos Al-Zubaidi, the President of the Southern Transitional Council, Supreme Commander of the Southern Armed Forces, as part of the many initiatives implemented by the Relief and Humanitarian Work Committee, including the fasting people meals that included all the districts of the Southern governorates, and the support to the health quarries to confront the Corona pandemic, and the latest of which is the relief of Tarim District in Hadramout Governorate from the flood disaster.

Al-Kaf pointed out that the food baskets distribution project began on Sunday with the delivery to the families of the martyrs of the Southern armed forces, and will include all Southern governorates by distributing 18,000 baskets.

https://en.stcaden.com/news/9554
You for Information technology