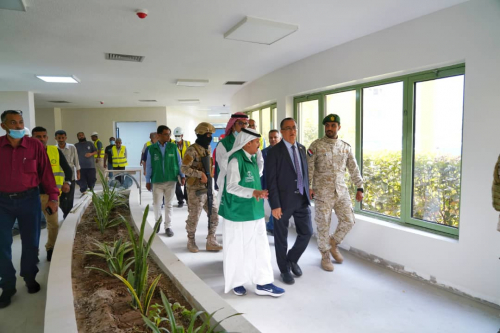 The Acting President of the Southern Transitional Council, Dr. Nasser Al-Khobaji, inspected on Wednesday, the progress of work on the project to rehabilitate Aden General Hospital, and the ongoing work at the Open Heart Center funded by the Saudi Program for the Development and Reconstruction of Yemen in Crater city.

In the visit, which included Eng. Adnan Al-Kaf, member of the Presidency of the Council, Acting Secretary-General, and Eng. Ahmed Madkhali, head of the Saudi Program for the Development and Reconstruction of Yemen in Aden the capital, and Mukhtar Al-Yafei, Head of the Radio and Television Unit in the Transitional Council, Dr. Al-Khobaji and his companions met with the project managers in the two implementing companies. and the consultant, in which they briefed them on the progress of the ongoing work and the level of achievement in the hospital and the heart center.

The Acting President of the Southern Transitional Council, and his companions toured the hospital departments and the Heart Center funded by the Saudi Fund for Development to get acquainted with the level of work accomplished in the two projects, and the hospital's internal and external departments, and its annexes.

In turn, Eng. Madkhali explained that the Saudi program is in constant contact and knowledge of the ongoing work in the Aden Hospital and the Heart Center, stressing that work is being carried out at a high rate according to the time plan set for implementation.

During the visit, Madkhali reviewed a number of difficulties facing the process of supplying medical devices and equipment as a result of procedures at customs ports, hoping that the leadership of the Southern Transitional Council will help facilitating the procedures for the delivery of equipment to ensure speedy processing.

After completing the visit, Al-Khobaji stressed on the speed completion of work in the hospital, which will contribute in providing health services to citizens in the capital, Aden and its neighboring governorates, stressing the willingness of the Southern Transitional Council to facilitate all measures aimed at rehabilitating the service sectors, especially the health sector..

https://en.stcaden.com/news/9509
You for Information technology