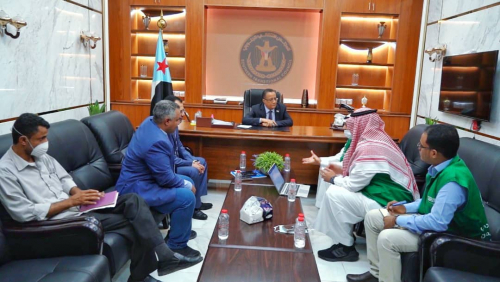 Dr. Nasser Al-Khobaji, Acting President of the Southern Transitional Council, Head of the Negotiations Affairs Unit, received Eng. Ahmed Madkhali, head of the Saudi Program for the Development and Reconstruction of Yemen, in Aden the capital.

In the meeting, which was attended by Eng. Adnan Al-Kaf, member of the Presidency of the Transitional Council, member of the negotiating team, Dr. Al-Khobaji listened from Eng. Madkhali about the total projects implemented by the Saudi program, including the Aden General Hospital, the forensic research laboratory at the Faculty of Law, as well as 24 laboratories in the College of Pharmacy and the Laundry Center Nephrotoxicity in Al-Mahra governorate.

The meeting discussed the problems that the Saudi program faces, due to the lack of plans and technical specifications in most state institutions, which delays the implementation of many projects.

The two sides also discussed establishing a number of projects in the academic education side, including the establishment of the College of Information and the College of Nursing, and the rehabilitation and restoration of a number of other buildings, in addition to completing some stalled projects, and studying the training and rehabilitation needs in the capital, Aden.

The Acting President of the Council valued the grant of Prince Mohammed bin Salman, Crown Prince of Saudi Arabia, from oil derivatives in the amount of 422 million dollars allocated to power stations for more than a year in the capital Aden and other governorates, stressing that this grant is part of the great support provided by the Kingdom of Saudi Arabia to our country in all areas.

Al-Khobaji thanked the Saudi program for all its development and service projects in the capital, Aden and other southern governorates, stressing the need for constant communication between the leadership of the Southern Transitional Council and the Saudi Program for the Reconstruction of Yemen, in the interest of the citizens.

https://en.stcaden.com/news/9506
You for Information technology