Al-Kathiri chairs extended meeting in Mukalla for members of National Assembly in Hadramout, Al-Mahrah and Shabwa, and  Council Local Leadership in Hadramout 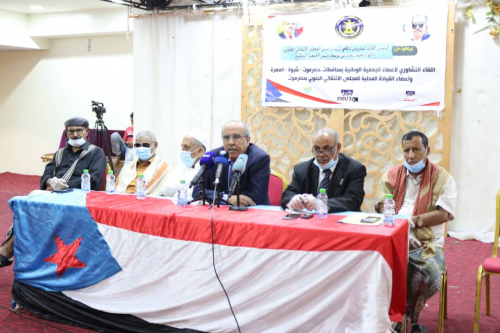 The member of the Presidency of the Southern Transitional Council, Deputy Head of the Negotiations Affairs Unit, and official spokesman for the Council, Ali Abdullah Al-Kathiri, chaired in Mukalla a joint and extended meeting of the members of the National Assembly in the governorates of Hadramout, Al-Mahra and Shabwa, and members of the council's executive local leadership in Hadramout, in the presence of the members of the Council's Presidency, Brigadier General Ahmed Mohammad Bamalem and Aqil Mohammad Al-Attas, and Sheikh Ali Sulaymani, Head of the Thought and Guidance Department of the General Secretariat of the Council, and Dr. Mohammad Jaafar bin Al- Sheikh Abu Bakr, Head of the Council's Local Leadership in Hadramout Governorate.

The meeting listened to a speech by phone from the President of the Southern Transitional Council, President Aidarous Qassem Al-Zubaidi, in which he expressed his happiness by talking with members of the National Assembly in the governorates of Hadramout, Al-Mahra, and Shabwa, and members of the local leadership of the Council in Hadramout, conveying through them, greeting and appreciation to the people of Hadramout and all the southern governorates, saluting their steadfastness and perseverance in the face of collective punishment policies practiced by the hostile forces, with the aim of pushing them to give up their national project to restore their independent state.

President Al-Zubaidi pointed out that all these challenges have only increased our people’s determination to move towards achieving their goals and get rid of the forces of terror, saying that the Transitional Council, accepted to bear the responsibility in a difficult phase that necessitated it to take difficult decisions and to walk in balanced steps to defend the people of the South and represent their national cause, and carried their banner towards restoring and building their independent state.

President Al-Zubaidi pointed out that the Council worked to convey the voice and aspirations of our people to decision-making centers at the regional and international levels.

Regarding the deteriorating and difficult living conditions of our patient southern people, President Al-Zubaidi emphasized that "the Council places the people's needs in terms of security, stability, services, salaries and decent living at the forefront of its concerns."

Al-Zubaidi added: "The leadership of the Council lives, moment by moment, the situation of our people in the various governorates of the South, and in Hadramout, Al-Mahra and Shabwa in particular, and pays special attention to what is happening in Hadramout valley and Shabwa in terms of targeting citizens with murder, oppression and persecution, stressing that every drop of southern blood treacherously shed by the forces of terror will be a hell that burns those forces and hastens their demise.

President Al-Zubaidi called on the parity government, the Arab Coalition countries, and the countries sponsoring the political process, to play their role in addressing the economic situation, providing services, addressing the issues of forced deportees and retirees, and activating the role of state institutions.

Regarding the Riyadh Agreement and the implementation of the remainder of its provisions, the President expressed his support for the call to resume negotiations on the remaining provisions of the Riyadh Agreement and to confront the subversive forces that seek to impede the completion of the implementation of its provisions, through their refusal to implement the transfer of the military forces in Shabwa and Hadramout Valley to the fronts to confront the Houthis.

President Aidaroos warned that the patience of the people of the south will not be prolonged in light of the continued illegal tampering in plundering their wealth and capabilities, depriving them of harnessing to strengthen their military arsenal that is directed to killing southerners and supporting and making terrorism.

President Al-Zubaidi valued the sacrifices of our southern people, thanks to which many gains were achieved for our people, calling for the importance of preserving them, by working in a patriotic spirit that transcends the differences, and places the supreme interest of the people of the South above all interests and considerations, and under the slogan of the South for each and all its people.

The President affirmed that the Council is moving steadily towards the goal and aspirations of our people, recalling his speech in the city of Mukalla in February 2019 in which he made it clear, "The road will not be easy, but we will follow it and overcome all difficulties."

President Al-Zubaidi called on the meeting attendants to continue expressing what the people want to achieve, adding: "The Council’s mission is very exceptional, and we have decided to take back the homeland from its kidnappers and we will go ahead with that."

He added, addressing the meeting:" today you are leading the aspirations of the people of the South in Hadramout, Shabwa and Al-Mahrah, I recommend that you be close to the people."

In the meeting, Mr. Al-Kathiri gave a detailed and comprehensive explanation about the Riyadh Agreement, and the progress of the negotiation process, and the gains our people achieved from signing it, indicating that the Riyadh Agreement is a phased agreement, and that the aim of it is to facilitate the life of the people in the southern governorates and unify the components of legitimacy to confront the Houthis.

He stressed the need to proceed with the implementation of the remainder of its provisions, pointing out that to date, only one item has been implemented, which is the formation of the government.

Al-Kathiri stated the gains made by the Transitional Council from the Riyadh Agreement for the South issue, the most important of which was the provision of the basic building block to enable the people of the South to manage their own affairs, in addition to the international and regional recognition that the Council gained, as an effective force on the ground, and legitimizing its political and military position, as a representative acceptable to it, and the people of the south accept it, in order to reach the final solution that the southerners seek through participation in the comprehensive peace process that will be sponsored by the United Nations.

Al-Kathiri explained the results of the council’s leadership’s foreign visits, and the efforts it is making to strengthen the relationship with the brotherly Arab countries, in a way that serves the people of the South and their national cause, stressing that the Council now has good relations with many countries, including the permanent members of the Security Council and other countries.

Al-Kathiri pointed out that communication is continuing with the diplomatic missions of the United States of America, the United Kingdom, and the Federal Republic of Russia, which were visited by the delegation of the Council headed by President Aidaroos Al-Zubaidi, during which many parties met, and yielded important results, which will reflect themselves in an influential manner on the course of political work and the issue of the South during the next period.

Al Kathiri added, "We will not reach our goal only through our solidarity and cohesion, and transcendence over our differences as southerners, and start building the institutions of our state."

The council’s official spokesman reviewed the latest political, economic and security developments and what the capital Aden in particular and the South in general is witnessing, with a clear response at all levels and in all fields with the aim of subjugating this steadfast and patient people and trying to subjugate them in various reprehensible and malicious methods, stressing that the council’s leadership will not accept and will not be satisfied by the deterioration of the living conditions of the people. .

Al-Kathiri indicated that the leadership is making its utmost efforts to alleviate the suffering that burdens the southern citizens day after day, stressing that the starvation methods that some political parties follow against the southern people will fail just as their predecessors failed.

Al-Kathiri reiterated the stability of the Southern Transitional Council's stance towards the national cause of its people, which is the key to peace, stability and security in the Arab region and the Gulf of Aden.

The attendees enriched the meeting, with their interventions and inquiries, which focused on the Council’s handling and plans to confront the challenges of terrorism and the policy of starvation and humiliation, calling on the leadership of the Arab coalition to identify and address the causes of popular anger and strive to find a radical and urgent solution to provide full support to the government, to enable it to perform its duties.

The attendees stressed the necessity of developing institutional work mechanisms within the council system, interacting with what the southern arena is witnessing of anger and congestion, and forcing the parity government to uncover the corrupt and address the imbalances in the work of the Central Bank and hold accountable all those involved in plundering public money.

https://en.stcaden.com/news/9497
You for Information technology