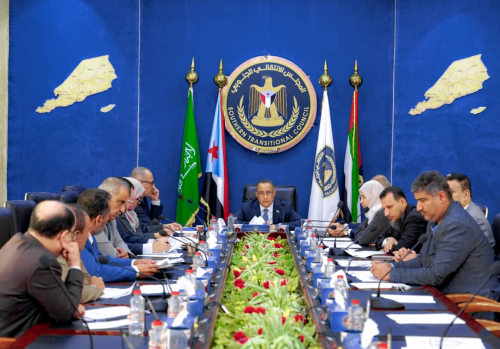 The Presidency of the Southern Transitional Council held on Wednesday, its second periodic meeting in this week, headed by Dr. Nasser Mohammad Al-Khobaji, Acting President of the Council, Head of the Negotiations Affairs Unit.

The Presidency stood before a number of developments and effective issues in the southern arena, foremost of which is the state of popular turmoil due to the continued deterioration of the economic situation and the deterioration of the level of services, in light of the official stance announced by the Southern Transitional Council in the statement issued by its official spokesman regarding this.

The meeting discussed the issues of the higher education and the mechanism for sending students to study abroad, and the results of the report submitted from the committee assigned by the Transitional Council to the Ministry of Higher Education in this regard, in which the Presidency has taken a number of measures to address the existing problems in this aspect, in a manner that guarantees transparency, fairness, and the application of the principle of parity stipulated in the Riyadh Agreement.

The Presidency also reviewed the monthly report submitted by the Administrative Board of the National Assembly, which included a monitoring of all activities carried out by the Assembly’s committees during the past month.

In addition, the meeting discussed a number of other matters related to the organizational work of the various council bodies, and took the necessary decisions and actions regarding them.

https://en.stcaden.com/news/9477
You for Information technology