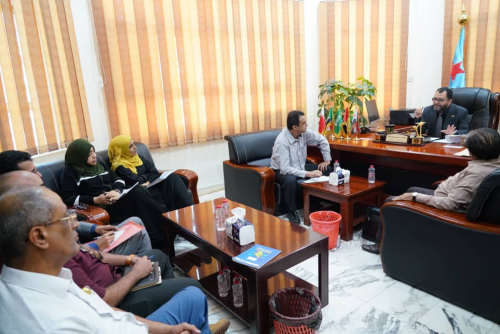 The Supreme Committee for Relief and Humanitarian Action of the Southern Transitional Council held on Tuesday, a meeting chaired by Eng. Adnan Al-Kaf; the member of the Council's Presidency and Chairman of the Committee.

At the beginning of the meeting, Eng. Adnan Al-Kaf welcomed the members of the committee, conveying to them the greetings of the President of the Southern Transitional Council, President Aidaroos Qassem Al-Zubaidi, and his constant keenness to follow up on the work of the committee, which is directly related to the living life of ordinary citizens.

Al-Kaf stressed the importance of the role that the relief teams of the sub-committees play in the Council's local bodies at the provincial and district levels, in order to achieve the objectives of the committee and the directions of the Southern Transitional Council in this regard.

Al-Kaf stressed the need for any future plans to accommodate the developments of the stage, and the economic situation that citizens suffer in the capital Aden and other southern governorates, in a way that contributes to alleviating their suffering according to the available capabilities.

The committee reviewed in its meeting  the final plan for humanitarian relief needs for the year 2021, as it was subjected to discussion, prior to its approval, with the observations received by the members.

The committee also discussed in its meeting a number of issues related to relief and humanitarian work, as well as the difficulties encountered in implementing the previous plans, and took the necessary measures regarding them.

https://en.stcaden.com/news/9431
You for Information technology