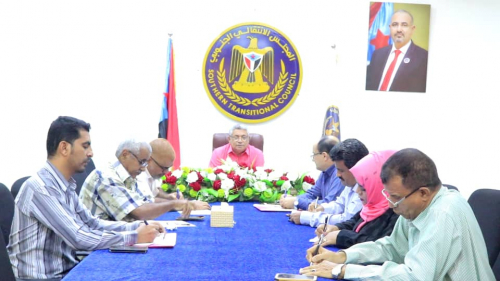 The Crisis Cell in the General Secretariat of the Presidency of the Southern Transitional Council held, on Thursday, an emergency meeting, to discuss the criminal attack that targeted Aden International Airport last Wednesday.

The meeting, that was chaired by Dr. Khaled Bamdhaf, head of the political department, head of the cell, the cell members stood for a minute of silence, and read Surat Al-Fatiha to the souls of the martyrs of the painful criminal attack in Aden International Airport, asking the Almighty, Allah, to dwell in them in paradise, and to bless the wounded with a speedy recovery .

The meeting condemned the treacherous criminal operation that targeted Aden International Airport the moment the government of power-sharing, emanating from the Riyadh Agreement arrived, stressing that its aim was to target the civil and historical status of the southern capital Aden, and the measures of normalization of life undertaken by the governor of Aden the capital.

The meeting recommended the need to strengthen the role of the government of power-sharing between the south and the north and support it in Aden, stressing the importance of restoring the security, operational, and service systems controlling Aden, as any capital of any state and granting it full independence.

https://en.stcaden.com/news/9368
You for Information technology