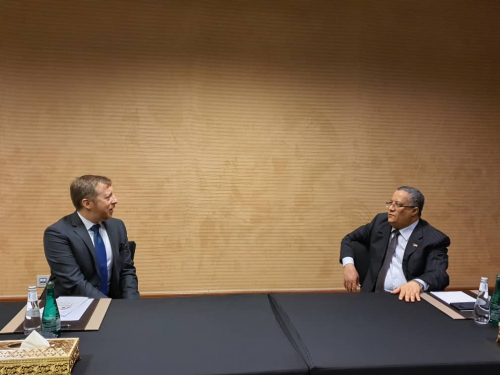 Dr. Nasser Al-Khobaji, member of the Presidency of the Southern Transitional Council, head of the Negotiations Affairs Unit, received at his residence in the capital Riyadh, the political and economic official of the US Embassy in Yemen, Mr. Christopher Deutch.

The meeting discussed the process of implementing the Riyadh Agreement, and the priority of forming the government and transferring forces to the fronts.

Dr. Al-Khobaji warned of the danger of the return of terrorist elements to the governorates of Shabwa and Abyan, after the efforts to destroy the Shabwani Elite Forces and the Security Belt, noting the active role that the southern forces, led by the Southern Transitional Council, have played in the framework of combating terrorism and securing the international maritime passage in Bab al-Mandab and along the southern coasts, hoping that the American side will play an active role in strengthening the role of the Transitional Council in combating terrorism, in a way that serves international peace and security.

Al-Khobaji also stressed on the effective partnership of the United States of America in combating terrorism, with all forces that reject terrorism in the region, foremost of which is the Southern Transitional Council.

For his part, Mr. Christopher Deutch affirmed the United States' support for the constructive Saudi efforts to implement the Riyadh Agreement and to unify efforts to bring peace and confront Iranian expansion in the region.

https://en.stcaden.com/news/9271
You for Information technology