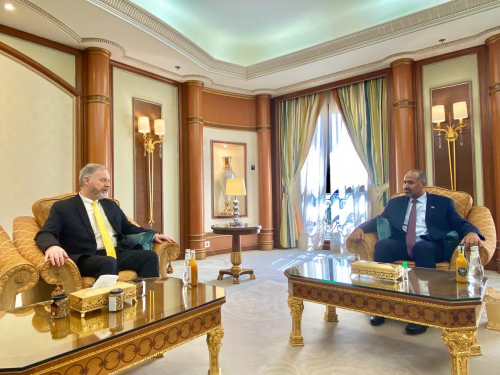 The President of the Southern Transitional Council, Supreme Commander of the Southern Armed Forces, President Aidaroos Qassem Abdulaziz Al-Zubaidi, received on Wednesday, in his residence in the Saudi capital, Riyadh, the Ambassador of the United States of America to Yemen, Mr. Christopher Henzel.

The meeting discussed the merits of the next stage after reaching joint solutions that are stated in the announcement of the Arab Coalition on Wednesday, through implementing the Riyadh Agreement, and addressing the repercussions that resulted from the recent crisis, in this regard, President Al-Zubaidi stressed on the need to work seriously towards a real implementation of the Riyadh Agreement, including the announced steps that have been taken to accelerate and activate the implementation.

President Al-Zubaidi valued the efforts of the Kingdom of Saudi Arabia, stressing on the principle of partnership, noting to the need to support the Transitional Council on the ground to contribute effectively and play the role assigned to it, adding that the next stage needs more seriousness and responsibility towards implementation, partnership, construction, and handling of unresolved issues, on top of those public services file.

In this regard, President Al-Zubaidi also affirmed the Council 's support for peace process and its readiness to participate effectively in accordance with the Riyadh Agreement.

President Al-Zubaidi touched on the joint efforts between the Transitional Council, the Arab Coalition countries, and the United States to combat terrorism, stressing on the need to develop this partnership and provide more coordination and support necessary to confront terrorism and extremism, as well as securing Bab Al-Mandab and the Gulf of Aden, and strengthening the role of the Coast Guard.

For his part, the US Ambassador congratulated the President of the Transitional Council on announcing the proposals of accelerating the implementation of the Riyadh Agreement, praising the role of the Council and its contribution to the settlement process, adding that the agreement was fair and wise, pointing to the role and efforts of the Kingdom, and affirming the intention of the United States to work alongside the Transitional Council in the state institutions.

https://en.stcaden.com/news/9235
You for Information technology