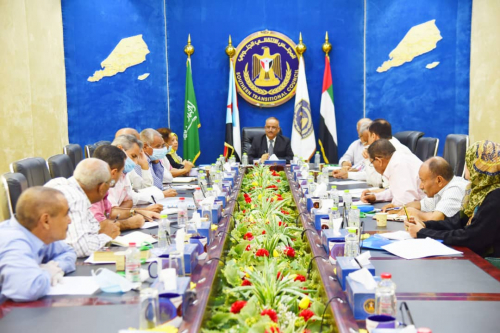 The meeting was devoted to discuss and evaluate the activities of the committees assigned to the supervision of governmental bodies and institutions, in which the heads of the committees presented a brief explanation of the nature of the activity and the work carried out by the committees during the past period and the difficulties encountered in the progress of their work.

The Chairman of the Supreme Economic Committee commended the efforts of the chairmen and members of the committees that contribute to the success of the work of self-administration for the South.

The meeting discussed the organizational list of regulations, tasks and terms of reference of the Supreme Economic Committee that was formed by a decision of President Aidaroos Qassem Al-Zubaidi, the President of the Southern Transitional Council

After extensive discussions by the committee members, the regulations were approved after considering the comments made during the discussion.

https://en.stcaden.com/news/9212
You for Information technology