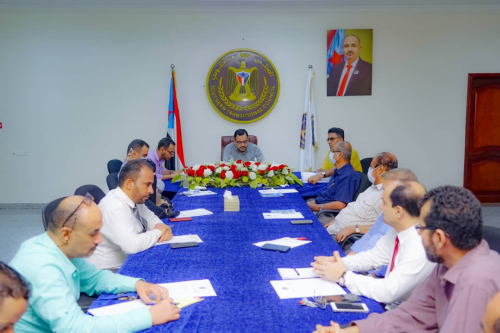 The General Secretariat of the Presidency of the Southern Transitional Council held its periodic meeting, in Aden the capital, headed by the Assistant Secretary-General, Major General Salem Al-Socotri.

The meeting discussed the status of services in the south in general, and in the capital Aden in particular, and the obstacles and problems caused by the government in the services sector, especially in the areas of electricity power, water, and its burdens that are borne by the self-administration to address the difficult situation of services left by the government.

The meeting previewed the health situation in the south, praising the role of the health, relief and environmental committees of the Transitional Council, and the merchants and supporters, and all efforts made to face the challenges to deal with the current health situation.

The meeting stood before the crimes carried out by the Islah militias in Shabwa, condemning the brutal crimes committed by these militias, especially in Nissab and Jardan districts.

The meeting praised the stands and activities that support the self-administation in the governorates of Socotra and Al-Mahra, reviving the national aspects of the citizens that reflected the popular rally around the south and the southern issue.

The meeting stressed on the need to stand by the citizens and work as much as possible to overcome the difficulties facing the society by all means for the interest of the homeland and the southern citizens.

The meeting discussed the latest developments in the southern, Arab and international arenas, and reviewed and approved the minutes of its previous meeting.

https://en.stcaden.com/news/9196
You for Information technology