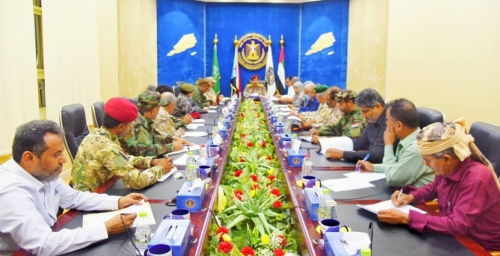 The Presidency of the Southern Transitional Council held an urgent meeting on Sunday, under the chairmanship of Major General Ahmed Saeed bin Brik, Chairman of the National Assembly, and in the presence of the Supreme Command of the Southern Army and Security.

The meeting was devoted to assess the developments in the southern national scene, in light of the increasing suffering of our people.

The meeting issued an important political statement as follows:

Important statement issued by the Presidency of the Southern Transitional Council

The Southern Transitional Council is following with great care, the increasing number of conspiracies and intrigues that targeting our revolution, our cause, and our social fabric, seeking to increase the suffering and pain of our people, on various fronts and levels, including:

1) Non-payment of salaries and wages of employees of the military and security institution, and the retirees and civilians for several months.

2) Stopping the support to fighting fronts, with ammunition, food and living requirements.

3) Stopping taking care for the families of the martyrs and treating the wounded.

4) Fueling national conflicts and seeking to destabilize and tear the national cohesion.

6) Deteriorating the public services, particularly the electricity, water and road infrastructure, which was clearly demonstrated by the recent flood disaster, that caused great suffering to our people in the southern capital of Aden, especially with the entry of the holy month of Ramadan, and using that as a weapon to bring the southerners to kneel.

In light of the continuing intransigence and obstinacy of the Yemeni government in carrying out its duties, and harnessing the resources and property of our people in financing corruption activities and transferring them to the accounts of corrupt people abroad, in addition to its lagging and evading to the implementation of its related parts of Riyadh agreement, with an incomprehensible and unjustified silence from the brothers in the Arab Coalition regarding all these abusive actions, which aim in its entirety to abort our revolution and our just national cause.

According to that the Transitional Council finds it obligatory on it, and based on the popular mandate granted to it in the historic Declaration of Aden on May 4 of the year 2017, to take the necessary measures to save our people and preserve the achievements of our revolution and the heroic victories of our resistance,

First: Announcing the general state of emergency in Aden the capital, and all southern governorates, and directing for implementation by southern military and security forces starting from Saturday 25/4/2020, which is 2 Ramadan 1441 AH.

Third: Calling on the masses of our people to rally around their political leadership, supporting and backing for the implementation of Self-Administration measures for the South.

Fourth: Forming committees to monitor the performance of public institutions and facilities and combating corruption in central and local bodies in coordination with the Chairman of the National Assembly and Heads of local leaderships of the Transitional Council in the governorates within the scope of geographical specialization, to achieve rational Self-Administration.

Fifth: Assigning the economic, legal, military and security committees of the Transitional Council to direct the work of public bodies, institutions and utilities to implement the self-administration of the South, each in its field of competence in accordance with the power of laws and in a manner that does not conflict with the interests of the people of the South.

Sixth: Calling on the governors of the southern governorates and officials of public institutions and utilities from the people of the south to continue their work in a manner that does not contradict the interests of our people.

Seventh: Calling on the brothers in the Arab Coalition and the international community to support the Self-Administration measures in a manner that achieves the security and stability of our people, and combating terrorism, and maintaining international peace and security.

Victory to the south .. Eternity for the martyrs

Supreme Commander of the Southern Army and Security

https://en.stcaden.com/news/9149
You for Information technology