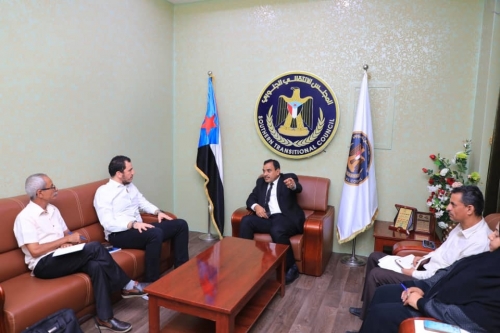 The Assistant Secretary-General of the Presidency of the Southern Transitional Council, Major General Salem Abdullah Al- Sokatri, met on Monday, at the General Secretariat in Aden the capital with Mr. Fadi Al-Maoushi, the Political Adviser to the Office of the United Nations Envoy to Yemen, Mr. Martin Griffiths.

The meeting discussed the developments witnessed recently in the local scene, and the repercussions due to stated positions by several parties, in addition to its effects on the general situation at present and in the future.

The Assistant Secretary-General stressed on the importance of the role of the United Nations in pushing the peace process forward, pointing out that the Transitional Council is keen to ensure the success of these efforts to reach solutions that relieve the suffering of the people, and end the state of war, and establish a lasting and sustainable peace.

The Assistant Secretary-General stated that the Transitional Council's efforts towards establishing peace in liberated and southern regions in particular clash with parties that do not believe in ​​accepting others, the right to partnership, and the importance of strengthening the home front, and the need to restore state institutions and normalize life, therefore the Transitional Council is still looking for an active and greater role both from the Arab Coalition to exert pressure to implement the Riyadh agreement, and through the international envoy to stand before the difficult humanitarian situation in the southern regions.

The Assistant Secretary-General pointed out that the services and living conditions in the liberated areas are very bad, and most services are faltering, in addition to the delay in salaries and their lack of coping with the high cost of living, besides the deterioration of health status, and the spread of epidemics and diseases, and all of these affect the simple citizens, as expected result to the Political obstruction, and lack of commitment to implement the Riyadh Agreement.

Al-Sokatri added: "Unfortunately, the government did not abide by its pledges towards the Riyadh agreement, and there are parties in the government do not want to normalize life in Aden and the rest of the governorates, and they want to keep the situation in Aden in a state of emptiness, whether in the administrative, executive, or security sides, and so it bears the full responsibility for the consequences of this situation. "

Al-Sokatri noted that the Transitional Council accepted the Riyadh Agreement as a road map to correct internal conditions and contributes to restoring state institutions and uniting military efforts to confront the Houthi militia as common enemy, but the government party did not commit to implementation and the intransigence resulted in the loss of Al-Jawf governorate and other strategic areas in Marib, and situation will be worse, and the legitimacy may find itself losing its last position in the northern regions if this continue.

Al-Sokatri continued, "There are raging fronts in the border areas with the Houthis, especially in North Al-Dhali '," noting that Al-Houthi directed all the heavy weapons that seized from Al-Jawf and Marib towards Al-Dhali governorate, expressing regret that the coalition weapons that were provided to the government forces are now in the hands of the Houthi militias.

Al-Sokatri emphasized that the Transitional Council looks forward to implementing the Riyadh agreement to put an end to the deteriorating services situation in all regions, and the catastrophic humanitarian situation that Shabwa is experiencing as a result of violations, kidnappings, enforced disappearance and torture, in addition to restoring security and safety after the spread and return of militant parties to areas under the control of the legitimate government in the north.

For his part, Mr. Fadi Al-Maoushi expressed the concern of the UN envoy, Mr. Martin Griffiths, about the slow progress of the implementation of the Riyadh agreement and its negative repercussions on the peace process in Yemen, stressing on the keenness of the UN envoy to follow the developments of the Yemeni situation, including the situation in the south, and his follow to all parties to reach a political peaceful and comprehensive solution of all issues on the Yemeni scene.

https://en.stcaden.com/news/9112
You for Information technology