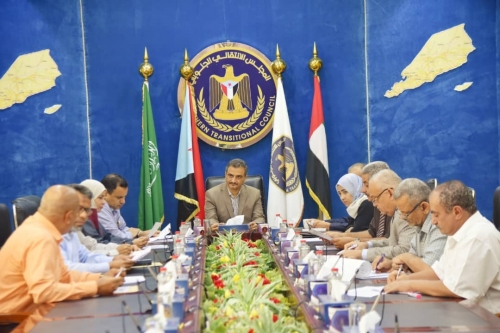 The meeting previewed the attempts of the Yemeni government to circumvent the Riyadh Agreement after the Transitional Council initiated the implementation of the majority of its obligations and withdrew the military forces, while the government refused to implement any of its obligations, whether on the political, military or security side, and even tried to push terrorist elements within the coast defense brigade that are not in the brigades' lists to arrange them in locations aimed at opening hotlines to escalate the military situation in the capital Aden from the western side, in addition to the continuous escalation from the eastern side in Abyan and Shabwa.

The Presidency expressed its thanks for the role played by the leadership of the Kingdom of Saudi Arabia to address the tension and push back the military groups from where they came and the commitment to the resolution reached by the high leaders of both parties and under the supervision of the leadership of the Arab Coalition to accelerate the implementation of the agreement in both military and security aspects.

The meeting praised the southern armed forces' vigilance and their willingness to sacrifice and defend the achievements of the south and the sacrifices of its martyrs, and the failure of the conspiracies of the Brotherhood and al-Qaeda elements supported by the government to explode the situation and disturb the security and public tranquility.

The meeting discussed the report submitted by the Military Adviser to the President of the Council specialized in military developments in the governorate of Abyan.

At the end of the meeting, the presidency stood before a number of reports related to the Southern Dialogue, the results of implementing some of the decisions issued by the third session of the National Assembly, and proposals for the presidency of the National Assembly and the General Secretariat for its implementation, in addition to a number of other issues related to the local activities of the Transitional Council.

https://en.stcaden.com/news/9060
You for Information technology