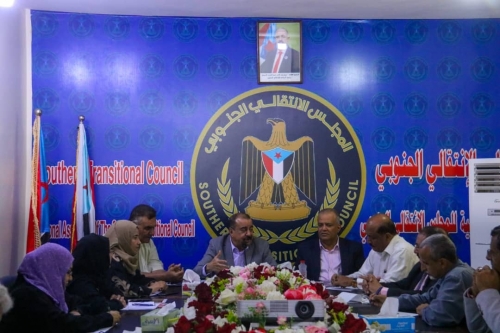 In the meeting, the Chairman of the National Assembly pointed out that the third session of the National Assembly present a sophistecated image of the missions of the Southern Transitional Council bodies at the local, international, and regional levels and attracting excellent reactions expressed by high world officials, including United Nations envoy Martin Griffiths, especially for what they came up with in the context of implementing the Riyadh Agreement and its terms.

The meeting discussed activating the role of the National Assembly in monitoring state institutions and fighting corruption, and working on implementing the decisions and recommendations of its third session.

The meeting emphasized on the continuation of the southern dialogue after the successes in the previous stages in agreeing to unify the political discourse.

The meeting agrred to form committees to prepare scenarios of applying the decisions and recommendations of the third session and assign the competent authorities in the Transitional Council bodies to implement them.

https://en.stcaden.com/news/9024
You for Information technology