The General Secretariat celebrates the 52nd anniversary of Independence Day 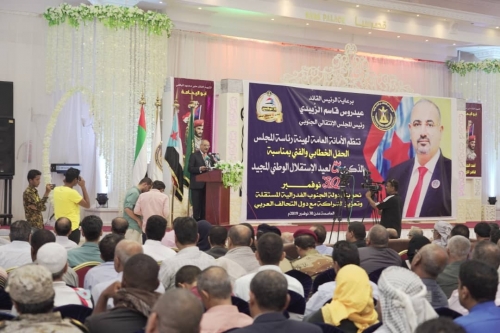 The General Secretariat of the Presidency of the Southern Transitional Council organized on Saturday in the capital Aden a speech and artistic ceremony , under the slogan "Together towards building an independent federal state of the South and strengthening partnership with the Arab Coalition countries", on the occasion of the 52nd anniversary of the Independence Day, 30 November.

Mr. Fadhl Al-Jadi delivered a speech at the ceremony in which he said: "As we celebrate the anniversary of independence, we honor our martyrs who sacrificed their lives for the independence of the land and freedom of its people, and we feel proud as we received the delegation of the Transitional Council who proved that the mandate of the people of the South to them was right due to their steadfastness on the goal, principle, and sincerity to the people and the homeland and the blood of the martyrs" .

Al-Jadi assured the responsible commitment of the Transitional Council in Riyadh agreement, as well as the commitment to the partnership with the Arab Coalition countries, especially Saudi Arabia, and the United Arab Emirates in the face of the Iranian expansion and its elements and tools in Yemen.

Al-Jadi said in the celebration:" The sincerity of the government's intentions must be confirmed by serious steps in implementing the Riyadh agreement, including the release of southern prisoners of latest events from Shabwa prisons, and the speed of treatment of the wounded, besides the speedy release of salaries for defense and security, as well as the provision of services that directly affect the lives of citizens, ''.

The celebration included artistic and poetry sections, and attended by members of the different Transitional Council authorities, and political, social, and media figures, academics, military, and security leaders, and a lot of people.

https://en.stcaden.com/news/8902
You for Information technology