President Al-Zubaidi : Our promise to the martyr is to win for the homeland 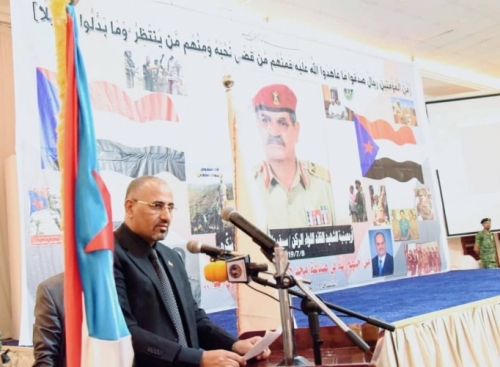 The President of the Southern Transitional Council, President Aidaroos Qasim Al-Zubaidi, affirmed that the loyalty to the heroic martyrs will not be completed until the completion of their journey to victory.

President Al-Zubaidi said in a speech at the commemoration ceremony of the martyr commander Major General Saif Ali Saleh Al-Afif, that the mandates left by the martyr are important and immortal that we all should be at the level of responsibility of carrying them.

President Al-Zubaidi stressed that the march of the martyr Saif Al-Afif is the march of our struggle to raise the word of truth and win for our homeland the south by strengthening our unity and cohesion.

President Al-Zubaidi concluded his speech by saying that our loyalty to the martyr Saif Al-Afif and his mandates and the goal he sacrificed for his soul will not be complete until we reach the rank of excellence in the belonging to the homeland and the readiness to sacrifice the precious and the noble for it, and this is our pact to the martyr Al-Afif and all the martyrs, from men to men, and we will not deviate from it as we are alive.

https://en.stcaden.com/news/8719
You for Information technology